The Dark Side of the Truth by Gary A. Caruso {blog tour, review, excerpt}

{about the book}
Soon after fifteen-year-old Will Reed and his friend Mason stumble over a corpse in the woods, Will’s ex-con father is arrested for the murder—and it’s Will’s fault. With the police about to close their investigation, Will must discover the identity of the ruthless killer before his father wrongfully goes back to prison.

In the spirit of City of Ember and The Goonies, it’s the discovery of a coded message that starts them on an unexpected path of mystery and danger. Will hopes finding an ancient relic will guide him to the truth and prove his father’s innocence. Unfortunately, Will soon learns he isn’t the only one searching for this valuable object. It’s a race to follow hidden clues until Will is confronted with a harsh reality. His determination to help his father has jeopardized the lives of the people he cares for. With a cold-blooded killer on his trail, Will must choose between the safety of his friends and family or freedom for his father.

{excerpt}
After returning the box to its hiding place, he reached for his phone, rotating it to different angles. “The next cache is about a mile up the trail. Once we loop around, we’ll stay to the left when the path splits.”
“I’ll follow you.” I didn’t want to admit it, but I was having more fun than I ever thought I would. It was like having a treasure map where “X” marked the spot, except the treasure was a bunch of worthless stuff.
We continued up the path for about a mile. Just like he said, we looped around and headed back on the Confederate side of the trail. After another thirty minute hike, it was time to turn left. That was until we noticed that turning left meant navigating a huge section of fallen trees and thick brush with thorns.
“Now what?” I asked.
“Well, it isn’t much of a trail, but the cache must be over there. The hint has to do with a pile of leaves.” He took a closer look at the trees, rocks, and fallen leaves that blanketed the area. “I think it might be by that big lump of leaves, but the map says it’s a little farther away.”
“Should we check it out?” I asked, hoping he would say no.
“I’ll search this area. Go ahead another hundred yards and see if you can find an easier path to the leaves.”
I started alone up the trail. Mason yelled a couple of times. He must have been knee-deep in thorns. I grinned. It was the first time I had heard him use profanity. I kept moving forward, but my trail narrowed and roots stuck through the dirt like speed bumps. With my attention searching for piles of leaves, I tripped on a root, falling to my hands and knees. As I brushed away the dirt, I looked in Mason’s direction, hoping he didn’t see how uncoordinated I was. The way the trail curved, he was out of sight. There was no way he saw me fall. I continued forward, keeping my eyes on my feet.
“Will!”
My head snapped around when I heard Mason scream. It wasn’t the same, I found the cache scream of joy as before. The pitch of his voice was high and sharp. He was panicking, yelling for help. I couldn’t imagine what could have scared him this much. I sprinted in his direction. The trail led me around a dense area of brush. Then I spotted him. He sat on the ground, frantically driving his feet into the forest floor, pushing himself backwards, away from a pile of leaves.
“Calm down,” I said. “Are you hurt?”
“Get him off me! Help! Get him off me!”
“What is it, a bug?” As I reached for his hand to pull him to his feet, I caught a closer glimpse of his face. He was pale, almost transparent. It was like something had scared him enough to freeze his blood. His mouth hung open and his eyes stretched wide, strained on something in front of him.
“Mason, you’re freaking out. What’s wrong?”
“Oh my God, Will! Help me! Please help me!” Tears now flooded down his face.
I moved behind him, hoping to recreate his point of view. Then I saw what had frightened him. Partially covered by a mound of wet leaves, a light, chalky grey hand, the color of sidewalk cement, lay flat across the ground. It almost touched Mason’s leg, like it was trying to grab at his ankle. I held my breath and my heart thumped in my ears as I followed the shirt-covered arm until I saw the dull, lifeless eyes of someone I knew.
“It’s Mr. Peters.” 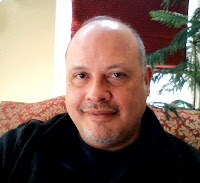 {about the author}
Gary Caruso lives in northern Virginia with his wife Jill, but their favorite place is in Ohio with their three beautiful grandchildren. Although Gary is exhilarated when he sits down to write, teaching middle school science is his first love. He’s passionate about empowering students to make thoughtful decisions and positive choices in life. Gary enjoys reading, especially fiction that blurs the line between what’s real and what’s fantasy. He never imagined becoming a writer until an ordinary car ride on a spring day jolted an unlikely thought into his head. Gary’s early experience writing is a reminder that no matter how intimidating the challenge, action and determination are the foundations for fulfilling any dream. Gary has an insatiable love for writing, a blessing he’s excited to share with his readers.

{my thoughts}
This is a really good YA mystery/suspense book. It's an easy read and you will be drawn into the storyline. You can imagine it in your head and will be wanting to turn the page to see what happens next. Very enthralling!