Okay y'all you seriously want to read this book!! I had a sneak peek at it and WOW!! It really rivals the Torn series for my favorite book by K.A. Robinson. 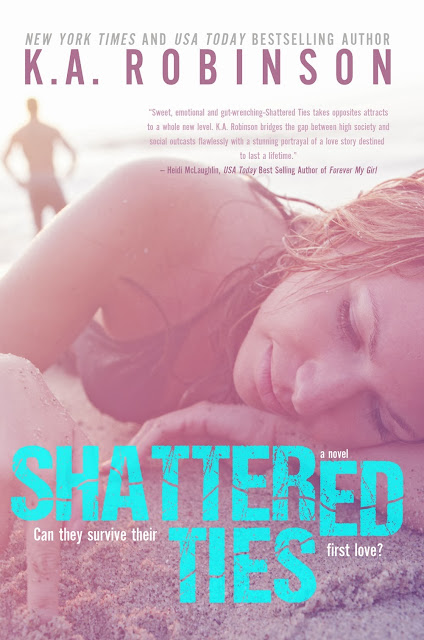 
With a former supermodel mother and a rock-and-roll legend father, Emma Preston has the best of everything. Nothing is as perfect as it seems though. After her parents divorce, she’s forced to live with her mother in a private Santa Monica community. Ignoring their parental roles, her mother becomes more focused on climbing the social ladder while her father is off on tour.
Growing up in a trailer park with his mother, Jesse is used to people looking down on him. When his mother begs him to submit an application for a scholarship to one of Santa Monica’s top private schools, he never expects to actually get it. When he does, he is forced to attend school with a bunch of rich kids. He ignores their stares as they judge him for having tattoos and a less than impressive car. As long as he has his surfboard and the guys at the tattoo shop, he knows he can make it through.

When Jesse shows up on the first day of school, Emma can’t help but be intrigued. Her mother would never approve of Emma talking to someone so poor, but she doesn’t care because something about Jesse draws her to him.

Jesse tries to hate Emma, but he discovers that he can’t resist her. Forced to hide their relationship from Emma’s mother and everyone else around them, things start to fall apart. When Jesse’s friend, Ally, decides to interfere, things go from bad to worse.

Can they survive their first love? Or will they be left with nothing more than shattered ties?

When K.A. first asked me to beta read Shattered Ties I was super excited, and I was really flattered too. I mean I was getting an early look at what everyone else wanted...and then I realized I had to tell her if it was good or not. I was scared to death. If it sucked, how did I tell one of my best friends her hard work was for nothing? But being a big girl, I jumped right in and started reading. Immediately I thought to myself that it was going to be a very emotional book. The prologue left me feeling anxious and wanting to know what would come next. First I was introduced to Emma and I admit I thought she was going to be a little bit of a spoiled rich girl but I was pleasantly surprised. Emma just wanted to be able to be herself and not under the control of her mother. Who really resembles the wicked witch. Then, there’s Jesse. Oh, the things I could say about Jesse. Jesse is hot. Like drop your panties in a heartbeat hot. Seriously. HAWT!!! He’s got a rough side but underneath it all he is really sweet and caring. Emma & Jesse are total opposites who can’t help but be together. Watching their story unfold had me giggling like a school girl, laughing out loud, and swooning hard. The story contains so many feelings that it’s hard to process them all at once. While I was reading I messaged K.A. a few times. I admit sometimes they were funny messages like “Oh man, he makes me want to be a virgin again” and then they turned mean... “OMG, you b!%$#”. I told you - EMOTIONAL! You will want to cry for the injustices, root for a happy ending, and you will fall in love with these amazing characters. It left me wanting to scream out that I needed more. Which I did do, many many times since. This is one of the best books I have read in a while. Now I have to wait on Shattered Ties 2...