The talented authors of Omnific Publishing are putting their best male characters head-to-head in a March Madness-style competition where you can vote on your ultimate guy! 39 characters will compete through several rounds until there is only one man left standing.


Life with Lesley is sponsoring Sebastian from Ember (The Ember Series)

When Candra Ember wakes up in hospital after a dangerous encounter with a red-haired woman, she is shocked to discover that seeing a winged boy wasn’t her imagination. Candra is exposed to a world of rivalry and sacrifice she never knew existed, and the aftermath of a war to save humanity thousands of years ago. Soon she finds herself relentlessly stalked by Sebastian, a beautiful and arrogant Watcher Angel and romantically pursued by his darkly seductive rival, Draven. Ultimately, dubious about her own goodness, Candra’s very existence compromises a tentative peace in the city of Acheron.


Excerpt:
“Candra?” Sebastian’s voice called to her softly.Candra blinked furiously, attempting to bring him back into focus. He was above her, surrounded in a warm halo of light making his blond hair shine. His face was in shadow, with worry etched in deep lines across his forehead.“I passed out?” she asked, slightly bewildered as he smoothed hair away from her face.“Yeah, you did, spectacularly actually. You dropped like a brick,” he told her, and she wasn’t expecting the pride in his voice or the way his lips twitched at the corner before he smiled. She was on the floor, cradled against his warm body. It felt nice, comfortable, and not awkward at all. The halo was, in fact, only the light of the lamp coming from behind him.“How long was I out?”Sebastian grinned, his eyes crinkling at the corner, and his full pink lips pulled back, displaying his blinding smile.“What?” Candra grimaced, confused as to why he was wearing his teas ing expression, and how she even knew which expression was his teasing one.“You been out about all of four seconds,” he said, chuckling.“Huh?”Sebastian scooped her up off the floor as if she weighed nothing and swung around to sit on the bed…with Candra still cradled in his lap. “You barely had time to get horizontal.”“I did it?” She’d expected it to work but was still surprised. He nod ded. “So you’re healed? I healed you?”He nodded again. His wings were gone, and he looked just like a human guy again — an extremely good-looking, semi-naked guy who was holding her in his arms, on her bed. Her eyes followed to where her hand was resting on his shoulder and slipped down, gliding over a tight bicep. She swallowed thickly as her heart started to beat erratically, and she felt the muscle tense under her fingertips.“Is that how your wings work too? You want it and you find it in yourself to keep them hidden?”“More or less.” He shrugged.Candra flipped her fingers over and grazed the smooth curve of her nails back up his skin toward his collarbone, watching how the pressure left pale lines that disappeared almost instantly.“What were we doing before we got distracted?” Sebastian breathed huskily into her hair, snapping her back to her senses.This is Sebastian I am man-fondling, she realized to her horror.She pulled away quickly, pushing off of him, but Sebastian held her tight, chuckling merrily, all traces of his earlier pain gone.“No,” he said, pouting playfully. “I like you right here, where you can’t get into any trouble.”Candra stopped fighting him and crossed her arms over her chest stubbornly. Sebastian’s definition of trouble and hers were apparently quite different. “Is that what I am to you? I’m just a project to study. Are you like the others, waiting to see if I’ll change?”Sebastian pursed his lips and frowned, drawing his eyebrows down ward. He shifted Candra on his lap, still holding her tightly, and scooted backward on the bed, until his back hit the metal frame.It was all Candra could do to keep from groping him, the way his muscles twitched and the fine indents appeared on his shoulders…and his scent — it was so strong. Every inhaled breath was filled with the sweet spicy fragrance of his skin lightly underlaid with a smoky aroma. She wondered if that was what Brie was referring to. Did Sebastian go to a bar earlier?“No and no,” he replied sternly, his serious brown eyes glinting with gold. “You are so much more.” 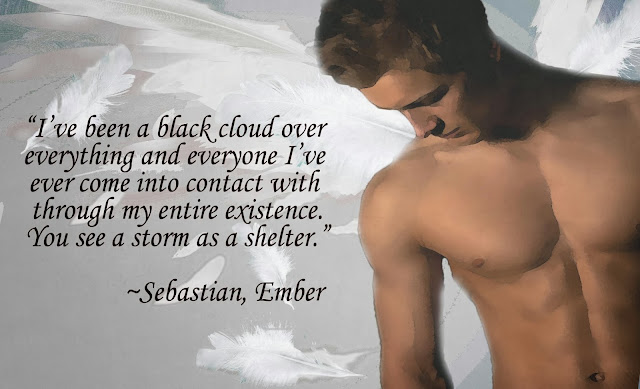 Bio:
Caleb is an angel, a General of sorts, in the army sent to destroy the Nephilim, a scourge of half human monsters. With the war long over, and riddled with guilt over so many deaths, Sebastian found himself at a bit of a loose end. He took on many roles over the years, working as a doctor, a teacher, and an assistant to Galileo. He often lived with a small group of angels he considers family and was devastated when one died and another fell. Finding the fallen one became an obsession. When he discovers her raising the Nephilim daughter of the angel who died, he begins to question everything about himself and what he believes.

He’s described as beautiful rather than handsome, with an athletic body, wide shoulders and slim hips. He dresses casually in jeans and often wears a faded leather jacket. He has tousled golden blond hair and brown eyes. He knows he’s attractive but doesn’t much care about his appearance. His wings are white and tipped with gold. He cares little for belongings other than his MP 3 player.

He was part of an unhealthy physical relationship with an angel from an opposing side for a long time and used physical pleasures to escape emotional pain. Sebastian smokes and drinks, and has a reputation in some areas as a pool shark. In many respects, he has a lot of growing up to do. He wants to be seen as a hero, but feels there is a darkness in him that makes him undeserving of the role.

What is your ideal woman like? -- I need a strong, someone feisty, and determined. Someone with a vision of their future. A person who wants me but doesn’t need me. A person who can see me for what I really am and not turn away.

What do you like the least about yourself? -- That I let down those who depended on me. I don’t regret the decisions I made in the past but hate I had to make them.

What are the three most important things in life to you? -- Doing the right thing. My family, the Watchers, and the humans we tried to save. Returning to Heaven.

What music is on your playlist right now? -- It depends on my mood. I enjoy the classics, Rachmaninoff, Mozart. I’m a big fan of Ludovico Einaudi. I also enjoy Etta James and when I’m in the mood, I can go for some Linkin Park and Limp Bizkit.

What is your favorite pet name for a girl? -- I don’t think I have one.

What is your idea of a perfect first date? -- Candra loves the stars but sometimes the sky is hard to see in the city. I had my favorite restaurant closed for the night so we could be alone, and arranged for a table to be laid on the roof. I had them set stings of twinkling lights above us so we could eat under the stars.

Where is the most romantic place you’ve ever kissed a girl? -- At sunset in midair over the city.

The winning blog may have some special giveaways for followers. And don't forget to enter the giveaway we are running right now!!!

Go to Love Between the Sheets to vote, and to check out the other Book Boyfriends who are in the running. http://www.readlovelust.com/omnific-smackdown