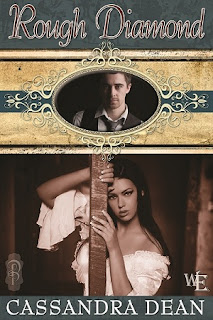 THE DIAMOND SERIES, BOOK 1 - ROUGH DIAMOND
Owner of the Diamond Saloon and Theater, Alice Reynolds is astounded when a fancy Englishman offers to buy her saloon. She won’t be selling her saloon to anyone, let alone a man with a pretty, empty-headed grin…but then, she reckons that grin just might be a lie, and a man of intelligence and cunning resides beneath. Rupert Llewellyn has another purpose for offering to buy the pretty widow’s saloon—the coal buried deep in land she owns. However, he never banked on her knowing eyes making him weak at the knees, or how his deception would burn upon his soul. Each determined to outwit the other, they tantalize and tease until passion explodes. But can their desire bridge the lies told and trust broken?

Lifting the glass, Alice studied its contents. “There is nothing quite like the enjoyment you get from a good whiskey. There’s the look and color of it, and the way it burns in the light.”

“It’s the same color as your eyes,” Llewellyn breathed, his own wide and empty of thought.

A smile tugged at the corner of her mouth. That’s right. Fool me into thinking there’s not an ounce of calculation to your words. “Is it? Mighty kind of you to notice.”

A happy grin was her response.

Well now, she was surely going to enjoy this. Setting her own half-smile, she tilted her glass, watching as the whiskey caught the light of the candle. “Have you ever noticed the feel of glass? It’s smooth against your fingers, and though the whiskey burns you, the glass is cool. It seems strange, doesn’t it? That such fire could come from something so cool.”

Intensely aware of his gaze upon her, she brought the glass to rest on her bottom lip. “You lift the glass to your lips, and all that coolness rests upon your flesh. The scent of the whiskey hits you, sweet and fiery. Your mouth waters, and you can’t wait to have it inside you. Slowly, so slowly, you tip the glass, teasing yourself as long moments in want of its taste stretch unbearably.”

He no longer wore a smile. Dark eyes watched her as strong fingers dug into the glass before him.

A prickle washed over her skin, her heart a steady beat in her chest. With hushed voice, she continued. “Liquid slides down your throat. The flavor explodes inside you, a glorious rush of sensation that overwhelms and consumes. You curl your tongue, enjoying the lingering sensation in every part of your mouth. Then, you look at the bottle.” Finally, she met his gaze direct. No subterfuge. No tease. “And you know you can do it again.” 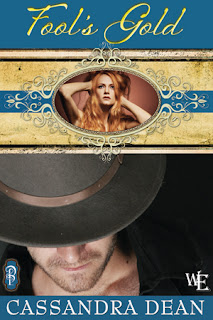 THE DIAMOND SERIES, BOOK 2 - FOOL'S GOLD
Christmas in Freewill Christmas Eve, the Diamond Saloon is empty of its people, and Pearl la Monte has a hankering to retire early. A pounding at the Diamond’s door rids her of such a fool notion. Her irritation rises when she sees the prissy, polite-like Garrett standing outside. Ethan Garrett has a powerful need to gain succor. When the saloon’s voluptuous redheaded singer scowls at him from the threshold of the Diamond, he doesn’t stop to think on how his ire at her has disappeared. Or how he just wants to spend some time in her company. When a blizzard storms in, trapping them, will they spend their time arguing or find their irritation for each other disguises something more?


Turning on her heel, Pearl marched off toward the stairs.

A weird kind of panic jolted through Ethan, one he’d never felt before in all his days. It was…he didn’t…. She couldn’t leave him. “Where are you going?”

She whirled to face him, her irritation plain. “I was seeking my bed before your arrival, and now I’m seeking it again. Help yourself to whiskey this one time. I got better things to do.”

Shoving to his feet, he strode to her. “Don’t just walk away when we’re discussing things.”

“We ain’t discussing nothing. You’ll be down here, waiting out the blizzard. I’ll be in my bed, doing what I was gonna before you arrived. That’s the end of it.”

Taking a step, she made to leave him. Again. He grabbed her arm. “Don’t leave me.”

“Don’t tell me what to do.” Glaring at him, she stood before the bar, her magnificent hair slipping from its pins, her breasts rising and falling.

Abruptly, his mouth went dry. Clearing his throat some, he said, “You’re supposed to offer succor to those in need.”
“We’re closed, remember?” Paint-less lips pressed tight together, she glared up at him.

They were so close he could see the faint marks of freckles on her skin.

A kind of haze came over him, tightening his skin and bringing with it something all-fired powerful and completely unstoppable. All the years he’d known her crashed through him, all the times she’d flirted with him and meant something else, all the times he’d seen her perform on stage and wished he could have held such fire.

Grabbing her upper arms, he hauled her against him and, ignoring her shocked gasp, he covered her mouth with his.

{about the author}
Cassandra grew up daydreaming, inventing fantastical worlds and marvelous adventures. Once she learned to read (First phrase – To the Beach. True story), she was never without a book, reading of other people’s fantastical worlds and marvelous adventures. Fairy tales, Famous Fives, fantasies and fancies; horror stories, gumshoe detectives, science fiction; Cassandra read it all. Then she discovered Romance and a true passion was born. So, once upon a time, after making a slight detour into the world of finance, Cassandra tried her hand at writing. After a brief foray into horror, she couldn’t discount her true passion. She started to write Romance and fell head over heels. The love affair exists to this very day. Cassandra lives in Adelaide, South Australia.

I had so much fun developing the Diamond Series. Originally conceived as a stand alone story, ROUGH DIAMOND came about after a suggestion by my editor on TEACH ME. She thought my voice would fit well amongst the stories of Western Escape, a line of Western-themed books all set within the fictional town of Freewill, Wyoming and published by Decadent Publishing. So I put my thinking cap on and came up with Alice and Rupert’s tale, one where a lady saloon owner with a claim to a coal-rich piece of land and a seemingly empty-headed Englishman lock horns. Alice knows Rupert’s not telling the whole truth and if he won’t be straight with her, well she’ll just tease it out of him…of course, her strategy turns around to bite her, but where would be the fun if it didn’t?

Once ROUGH DIAMOND was complete, I kept wanting to know about Alice’s friend and the star of the Diamond Theater, Pearl la Monte. Pearl seemed unreasonably irritated by the man Alice had hired as her coal prospector, Ethan Garrett, and I had a hankering to know why. As it happens, my editor on ROUGH DIAMOND also wanted to know and would I please write Pearl and Ethan’s story? Thus, FOOL’S GOLD was born! Pearl and Ethan are trapped alone within the Diamond Saloon and all that angst soon turns to a different kind of passion…

Now, a series is not truly complete until there’s a third, or at least I like to think so! Thus, EMERALD SEA will be the third and final book in The Diamond Series. Still in the “oh my, what on earth is going to happen in this story??” phase, EMERALD SEA will be a tale about a revenge-seeking woman and a reluctant gunslinger. To get a feel for what I hope the story will be like, I keep having that magnificent first line from The Dark Tower: The Gunslinger swirl about my head:

“The man in black fled across the desert, and the gunslinger followed.”

Sigh. How cool is that? Thank you, Stephen King.

Anyhoo, I hope you enjoyed hanging with me and you check out The Diamond Series!