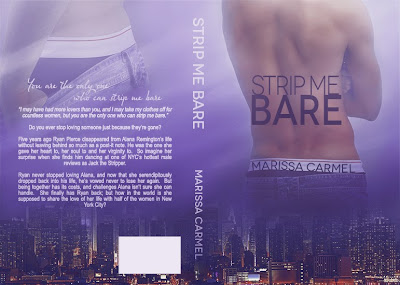 “I may have had more lovers than you, and I may take my clothes off for countless women, but you are the only one who can strip me bare.”

Do you ever stop loving someone just because they’re gone? Five years ago Ryan Pierce disappeared from Alana Remington’s life without leaving so much as a post-it note behind. He was the one she gave her heart to, her soul to and her virginity to. So imagine her surprise when she finds him dancing at one of NYC’s hottest male reviews as Jack the Stripper.

Ryan never stopped loving Alana, and now that she serendipitously dropped back into his life, he’s vowed never to lose her again. But being together has its costs, and challenges Alana isn’t sure she can handle.

She finally has Ryan back; but how in the world is she supposed to share the love of her life with half of the women in New York City?

{excerpt}
(All excerpts are unedited and subject to change)

“Nothing’s wrong,” I try to pull his lips back to mine, but his head won’t budge. He just stares down at me with a forceful glare. Resigned, I ball my fists over my eyes and sigh. “What do you want me to tell you? I’m insecure? I’m trying not to think of all the women you have all over you? Or of all the women you’ve had?”

“You’ve been with other people?”

“What do you mean?” he asks confused.

We never did dredge up my intimacy issues or talk about my sexual past, if you could even call it that. One boy my sophomore year of college, the all around nice guy I could never pull the trigger with. Even though I tried, desperately. I couldn’t muster up enough courage to go through with it. I was so messed up after Ryan; I had trouble letting anyone in.

We’d start but never finish. And the one time it got to the point of penetration I absolutely freaked. We stopped speaking after that and I’ve sworn off men ever since.

“Intimacy was hard for me,” I tell him, “because I was always afraid I’d wake up, and who ever I spent the night with would be gone. I didn’t want to hurt like that again,” I look away from him. This conversation sucks. I don’t want to look weak. It’s a character flaw imbedded by my father. Remington’s aren’t weak. They don’t show emotion. They don’t even have emotions.

I’m not a very good Remington.

“You didn’t tell me,” he stipulates, “Do you really think I’m not going to be here in the morning?”

I shrug, because for all intents and purposes I do believe he’ll be here tomorrow, but there’s still a hurt, eighteen year old girl inside me who needs to come to terms with what happened. That Ryan didn’t leave because he wanted to. He made a choice that affected more than just us. And it hurt us both equally the same.

“I don’t want to disappoint you,” I mumble, and now I’m beat red. I’m pretty sure when Emily told me to vulnerable in Ryan’s arms, she didn’t mean like this.

“Alana, you could never disappoint me,” he shifts while still on top of me, “I may have had more lovers than you, and I may take my clothes off for countless women, but you are the only one who can strip me bare.”

{about the author}
Marissa Carmel has loved writing ever since a young age. She has a duel degree in History and Political Science, but took as many creative writing classes in college as she could. She spent most of her twenties bartending, which is where she met her husband and a multitude of interesting people. When she’s not reading or writing, she’s hanging out with her family, experimenting in her kitchen or doing yoga on the living room floor.