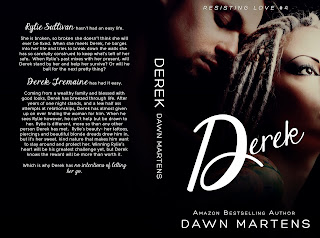 Rylie Sullivan hasn’t had an easy life. She is broken, so broken she doesn’t think she will ever be fixed. When she meets Derek, he barges into her life and tries to break down the walls she has so carefully construed to keep what’s left of her safe. When Rylie’s past mixes with her present, will Derek stand by her and help her survive? Or will he bail for the next pretty thing?
Derek Tremaine has had it easy. Coming from a wealthy family and blessed with good looks, Derek has breezed through life. After years of one night stands, and a few half ass attempts at relationships, Derek has almost given up on ever finding the woman for him. When he sees Rylie however, he can’t help but be drawn to her. Rylie is different, more so than any other person Derek has met. Rylie’s beauty- her tattoos, piercings and beautiful blonde dreads drew him in, but it’s her sweet, kind nature that makes him want to stay around and protect her. Winning Rylie’s heart will be his greatest challenge yet, but Derek knows the reward will be more than worth it.
Which is why Derek has no intentions of letting her go. 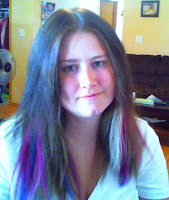 {about the author}
I'm Dawn. I co-wrote a two books (Chase and Kade) with fellow author Chantal Fernando, in the Resisting Love. We went solo on three of the books, she wrote Ryder, and she is writing James, and I'm writing Derek.
Also working on a book currently with my friend Isabella Bearden, called A Second Chance!

I'm a beta reader for many authors, I'm on a few authors ARC list, because apparently I'm THAT awesome. ;) And I also Edit. Not a professional, but I do help a few with that.

I have two children, 5&2, and have another on the way. They bug the shit outta me, but hey, that's what kids are supposed to do. ;) Married since 2007. He's amazing, but he's also a bigger pain in my ass than my kids are.
I love to read. and I love being able to write stories that *I* want to read!
I couldn't do this without the help of some very special friends!