{about the book}
Ten years had passed since they joined hands at the high altar of the old abbey church, ten years since they were hand fasted, engaged to be married. It had been ten years in which Katherine had finished college, completed med school, and become a doctor. For ten years they had not seen each other, had not spoken, and had not written.

It was what they had agreed.

“I’ll find you,” Steven had told her. “In ten years, when we have finished school, when we are able to marry, I’ll find you. Whenever you see a yellow rose, remember me. Remember I love you.”

For a decade, she had been waiting, hoping, and praying.

Today, on her birthday, a vase of yellow roses was waiting when she arrived at home.

Although the action occurs primarily in New York City, psychologically, the story is set in a small town in Virginia. Change came slowly to the rural South in the nineteen seventies, and attitudes toward women were most resistant to change. These attitudes threaten to destroy Katherine and her chance for the life for which she yearns. The Handfasting is a story of love: love renewed, a suitor spurned, a vicious attack, and a struggle for healing. 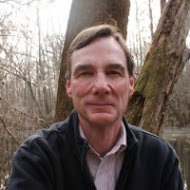 {about the author}
David Burnett lives in Columbia South Carolina, with his wife and their blue-eyed cat, Bonnie. The Reunion, his first novel, is set in nearby Charleston.

David enjoys traveling, photography, baking bread, and the Carolina beaches. He has photographed subjects as varied as prehistoric ruins on the islands of Scotland, star trails, sea gulls, a Native American powwow, and his grandson, Jack. David and his wife have traveled widely in the United States and the United Kingdom. During one trip to Scotland, they visited Crathes Castle, the ancestral home of the Burnett family near Aberdeen. In The Reunion, Michael's journey through England and Scotland allows him to sketch many places they have visited.

David has graduate degrees in psychology and education and previously was Director of Research for the South Carolina Department of Education. He and his wife have two daughters.

{my thoughts}
This book is going to take you through all of the emotions. You are going to read about a love story that starts in 1967 and goes through the years. During that time you are going to feel anger, love, amusement...like I said every emotion possible. It was a really good, easy read and one I would tell you to grab up now. You will enjoy it! I know I did.