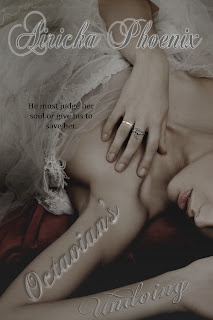 {about the book}
Sons of Judgment Series

Octavian Maximus has already given up his life once for a love that left him empty. He isn’t about to give up his afterlife for a green-eyed, red-haired spitfire with no sense of self-preservation and a smile that could melt even his icy heart, especially since he’s so close to being given a second chance at living again. For a Son of Judgment, being offered life is the reason they were so willing to murder without remorse. Octavian is one of the best. He’s never failed to take out a Mark, until the night one got away and he let it, unsuspecting of the consequences of his mistake. When the Mark tracks him, hell bent on revenge, Octavian is ready for it. What he isn’t prepared for is Ryleigh jumping in to protect him or her death because of it.

Ryleigh Masters has her own problems. Her father was laid off… again, bills are piling up and the rent is due. When she’s given the waitressing job at Final Judgment, it’s a dream come true, until she meets the owner’s son. Octavian makes it no secret that he wants her gone, but Ryleigh has already signed the contract and she needs this job. She’s willing to do whatever it takes to keep it, even put up with the unreturned feelings Octavian provokes in her. The night he’s attacked, the last thing she expected to happen was to die and wake up with Octavian’s knife at her throat and her life irrevocably changed.