Around the Watercooler - Friday #Linkup #2 @3lilapples


I've partnered up with my girl, Amanda, over at 3lilapples to do this Friday link-up. :) I think it's a fun way to get to know each other a little better. I hope you'll join in with us!!


The question this week:What was the first thing you noticed about your SO (significant other)?

Well, I met Robby when we both worked at the same construction company. I worked inside as a secretary and he worked doing roofing and stone work. The first time I ever saw him was when my boss took me around to different job sites on our lunch break showing me what they did. I was totally clueless. I had only got the job because my brother worked there as well.

Anyways, Shana (my boss) took me to a stone job where her brother-in-law was working. Robby was his helper at that time. We just sat in the car and she explained a few things to me...but there he was - hot, sweaty, muscular...and so cute.

I found out his name but nothing else. The next time I saw him he was going into his supervisor's office and I saw it. A tattoo on his right bicep. He was really big into wearing sleeveless shirts back then and all I saw was tattoo and tan.

So basically that's what I noticed was his arms and how strong he looked. He was such a little hottie. I still think he is. ;) ♥ 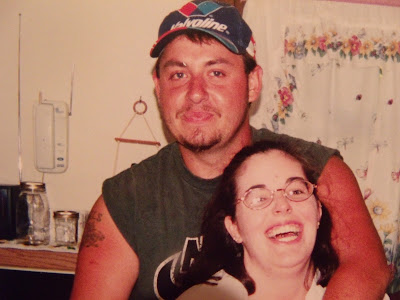 I would love for you to join in! It's so fun to get to know other bloggers and readers!!

LABELS: 3lilapples, About Me, Amanda Powers, Around the Watercooler, blogging, linkup