{about the book}
A fable, dripping with gold and uttered from the lips of a dying man sets four friends off on the adventure of a lifetime. The last remnant of an age lost to myth calls from the very cusp of Hell as the dangers rise with the heat of the tropics and they are plunged into the unfathomable depths of the Amazon where they will struggle for survival in an ancient city born of blood, lust and betrayal.

With the whispers of a dead man echoing promises of power, wealth and desire, their path to paradise is laid out in the bones of those who learned too late what is waiting beyond the mist of time.

Purchase on Amazon (Kindle edition) for only $2.99. 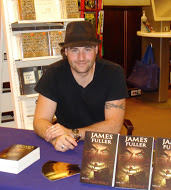 James Fuller has enjoyed the fine art of writing for many years now, he‘s been busy with many on the go book projects lately as he‘s extended his writing from fantasy fiction to also writing a short story anthology as well as an up and coming zombie apocalypse. His popularity has grown not only locally but online through Facebook where he runs his author’s page which is constantly growing as he hosts contests and give-aways daily.

James has an absolute passion for his characters and unique twisted plots with his detailed writing skills that really brings his books to life and makes his characters and their journeys so favourable. As an author he also goes above and beyond when it comes to writing battle scenes, the intricate design and explanations of fighting, not only in swordplay but also in tactics is one of James incredible expertise in which he delights in.

When James isn’t on his computer writing the third installment of the Fall Of A King series “The Bastard King: Birthright“, he enjoys recreational activities such a camping, fishing, hiking, and archery. Along with being an adventurous outdoors man James also spends many of his hours in a day as a devoted husband and father.