Lost in You by Heidi McLaughlin

{about the book}
Ryan Stone is a less than average teenager. He doesn’t have fancy clothes. He doesn’t carry around the latest smartphone and he definitely doesn’t have an MP3 player. Instead, he goes to school, does his chores and dreams of a new life away from Brookfield where he’s expected to follow in his blue collar family’s footsteps.
Hadley Carter is America’s Pop Princess. A successful recording artist living her dream with a sold-out tour and a handful of Grammy’s there isn’t much that she wants for, except love. But finding love on the road is near impossible when all she longs for are romantic dinners, a nighttime stroll on the beach and holding hands with someone who isn’t going to exploit her. When a chance encounter introduces Ryan to Hadley, will he be like her adoring fans looking for a way in, or will it be Hadley who pursues Ryan even though it might cost her the only career she's known.Lost in You is a story about following your dreams, taking risks and getting lost in love. 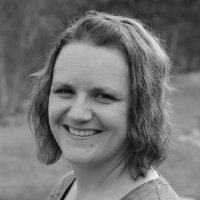 {about the author}
Heidi is the author of USA Today, Kobo, Digital Book World, Amazon and Barnes & Noble Bestselling novel, Forever My Girl

Originally from the Pacific Northwest, she now lives in picturesque Vermont, with her husband and two daughters. Also renting space in their home is an over-hyper Beagle/Jack Russell and two Parakeets.
During the day Heidi is behind a desk talking about Land Use. At night, she's writing one of the many stories planned for release or sitting court-side during either daughter's basketball games.
Facebook
Lost in You on Facebook
Forever My Girl on Facebook
My Everything on Facebook
Website
Goodreads

{my thoughts}
I first found Heidi McLaughlin when I was browsing for books on Amazon...I saw that her first book, Forever My Girl, had just released and I purchased it because it sounded really good. I wasn't wrong. I really enjoyed it. Then I read the novella My Everything. And now I just got done reading Lost in You.

Lost in You was amazing!! It's about a young boy, Ryan, who has a pretty crappy life. He's a teenager who isn't allowed to do all the things teens do. His family doesn't have a lot of money and all he wants to do when he graduates is leave. Then he meets Hadley. Hadley is a rock star - and everything he isn't.

Reading about these two opposites attract will make you yearn for the feelings of your first love. It was sweet and intense. It was hot. You could basically feel the wanting jumping off the pages. It made me smile and it made me cry. I felt a heart-wrenching need for these to Ryan & Hadley to be together, to overcome all the obstacles in their way.

It's a beautifully written story of love. You won't be disappointed.