I have a totally HOT cover for Sophie Monroe's new book, Afflicted. You are gonna LOVE it!! I've had a chance to beta read Afflicted and holy cow!! It is AWESOME!!! ♥

{about the book}
Afflicted is expected out in early to mid June. Official release date still pending.

Fresh off tour Blake Potter, the sexy bassist for Battlescars, is in Smithville, Ohio to work on their next album ‘Coming Clean’. Still pining after Aubrey’s best friend, Piper, it’s going to be harder than he expected to see her back with her long-term boyfriend, Cole. He’s trying his hardest to forget her, but no matter how hard he tries to stay away circumstances keep bringing them together. Being burned before, he refuses to let it happen again. He’s still struggling to let go of Rowan, the girl that made him the way he is.

Piper is fighting an uphill battle of her own. She’s working her ass off trying to make a name for herself as a tattoo artist. Her long-term boyfriend, Cole, was recently discharged from the Marines turning her world in a way that she never expected. When he begins leaving for days at a time Piper starts struggling to help him pick up the pieces. She calls the one person that might be able to help, Blake. He becomes the friend that she needs no matter how much it’s killing him.

What will happen when one phone call changes everything for both of them leading them in a path that neither anticipated? Pasts will come out of the shadows and threaten to ruin everything.

{about the author}
Sophie Monroe is an author from New Jersey. She’s obsessed with music and loves a good story. She released the Amazon Best Seller Battlescars in March. Afflicted is a spin-off of Battlescars with different characters but has appearances of the reader’s favorites Jake, Aubrey and Granny Jean, along with the rest of the gang. 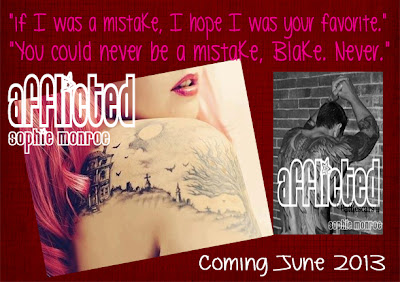