It Happens All the Time by Megan Hilty {Music Review} 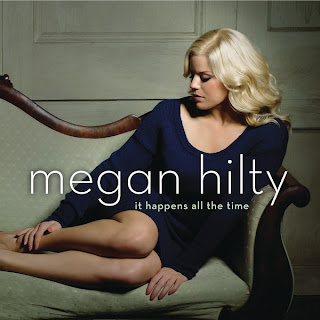 I just got an email this morning telling me about this new album to be released in a couple weeks and I was so excited about the music that I wanted to post it right away. Y'all know I'm a big Glee fan and they do a lot of covers of songs. So if I like a song and someone covers it and does a good job I get uber happy.

Now I had never heard of Megan Hilty before so I did a quick Google search, because Google is our friend and a know-it-all at that. So what did I find out? Megan Hilty was a hit on Broadway known for shows such as Wicked and 9 to 5. I also found out she's on a NBC tv show called Smash. I only watch a few shows so I can't tell you about Smash. It seems like she has had a lot of ups and downs in her life and is trying to recreate herself into something better and more real.

Boy, I can tell you that this girl has a voice! I've listened to the songs a few times now. It is love. I think my favorites are Dare You To Move and Safe & Sound.

Here is a copy of the press release I received that goes into detail about why she chose the songs she did and how her fans are going to see a new side the person she is.

Megan Hilty’s debut album, It Happens All The Time will be available March 12, 2013 from Portrait, Sony Masterworks’ new adult contemporary imprint, in partnership with Columbia Records. The album is produced by Grammy-winners Andy Zulla and Jimmy Hogarth and showcases a different side of Hilty, the beloved star of the hit musical TV drama series Smash.

The repertoire is a significant step outside of both the musical theater world in which Hilty initially found fame - via Broadway roles as Glinda in Wicked and Doralee Rhodes in 9 To 5: The Musical - as well as her TV character Ivy Lynn in Smash, in which she’s sung such noteworthy songs as the Grammy-nominated “Let Me Be Your Star,” Carrie Underwood’s “Crazy Dreams” and the Rose Royce (and Mary J. Blige) soul hit “I’m Going Down.”

With It Happens All The Time, Hilty was determined to display a side of herself that even her fans have yet to see. “I want to show a different side of me because it’s the first thing I’ve ever done that’s just me and not attached to any character or story line,” says Hilty. “Coming from a musical theater background, everyone expects that I’d do a Broadway album or pop standards. Smash changed all that. We did a completely different arrangement of ‘Crazy Dreams,’ and it resonated with a lot of people.”

For Hilty, the key to her debut album was finding songs that she could identify with. “Stylistically these aren’t the type of songs that I’m used to singing. It was exciting and challenging, for example, to take a song written by Ne-Yo and make it my own,” says Hilty.

“I was looking for lyrics I could connect with,” she explains, “which comes from another part of my theatrical background: I always feel that there has to be a point to what I’m singing, instead of it just being a pretty sound. The lyrics reflect the year I’ve had in breaking up and finding new love, whereas the music shows my eclectic tastes. Andy [Zulla] tied it all together with his arrangements.” While it wasn’t intentional, the album took on a break-up theme, “not a sad one so much as the end of a chapter and wondering what comes next,” she says.

Of the original songs on It Happens All The Time, Hilty cites “Be A Man” as “one of the ultimate breakup songs. It begs someone to tell you how they really feel and that the relationship is over.” She also points to “Walk Away” (co-written by Ne-Yo, Carrie Underwood and Luke Laird) for its message of empowerment in the face of a painful breakup. Keeping with the theme of new beginnings, “No Cure” is unique to the rest of the album in that co-writer Hector joined her on vocals, giving it the feel of a duet, which Hilty loved.

The title track on the album drew Hilty in the first time she heard it. “’It Happens All The Time’ is about the frustration of trying to find true love. If it happens all the time then why hasn't it happened to me?”

When taken together, the songs on It Happens All The Time instill great pride in Hilty as “the first recording that’s just me. It’s really thrilling to hear and I can’t wait to share it with my fans.”


To pre-order this CD or MP3s you can head on over to Amazon and you can also get a chance to listen to all of these songs.

Hope you enjoy as much as I did!!