Warning: This is a football post from a girl. Thoughts may be scattered and I go into details that some might not. But as always I'm entertaining. :) 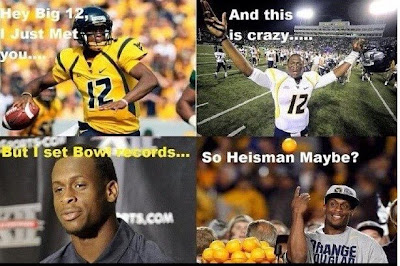 So I'm a huge college football fan. I really enjoy it. My team is of course the West Virginia Mountaineers. Yesterday really started off college football right. There were a lot of games on television. They're will be a lot on today and tomorrow as well.

WVU played their in-state rival, Marshall, yesterday in the 7th (and final for now) matchup of the Friends of Coal Bowl.

Years ago we use to play Marshall and for some reason (*cough* we kept kickin' their butts) we stopped. Well, there was so much desire for these games that the governor, yep the governor of WV, stepped in and negotiated some games. It was concluded that there would be 7 season games in which the winner would receive the Governor's Trophy. Game would also be rotated to play both in Morgantown and Huntington to try to make it fair.

But really I have to say it was in no way fair. To call this a rivalry wouldn't Marshall have had to beat us at some time? In the last 12 games we have played them, all the way back to 1911 - WVU has been the winner.

Marshall has never beat us.

This is a little hard because college football around here is taken very seriously. You have a team and if others talk about them, well let's just say it can get ugly. The majority of my family are WVU fans, but there are those sad few that went to and root for Marshall. Smack talk has to be calmed down then. You don't want to make family mad. :)

Anyways, yesterday was an awesome day. Needless to say, they won. They won 69-34. That's was an amazing score. It was nice to have another win under the ol' belt. Geno Smith, Tavon Austin, and Bailey were tearing that field up! Those boys are GOOD!

See WVU has been a part of the Big East forever. Until this year. We have joined the Big 12 Conference. That means bigger named teams and a harder schedule. It's scary yet exciting at the same time. The Mountaineers have never been given a lot of credit when we've stepped outside the Big East and played bigger teams in bowl games.

When Rich Rod left WVU in the ugliness of heading to Michigan (which canned his butt pretty quick ... and didn't Michigan just last night lose to Bama? uh-huh.) and left the team high and dry for the 2008 Fiesta Bowl against Oklahoma, Coach Stewart stepped in and led these guys to a victory. No one though they could do it. But we did. And it was ugly for Oklahoma. :) Stewart then became head coach until they hired Dana Holgerson and then things got dicey and Stewart was let go and Holgerson stepped in a little sooner than expected. Lots can be said on that issue but many WVU fans don't agree with me and I'll just shut up about it now. No use beating a dead horse. And again last year in the Orange Bowl we played Clemson. That was a very embarrassing game for Clemson. The Mountaineers scored 70 to their 33.

Basically what I'm saying is West Virginia has a chance to make themselves known this year. We've had excellent players in the past - Pat White and Owen Schmitt to name a couple, but we've never been given the chance to show who we are and what we can do.

I think our time is now. It's beyond exciting to see.