I received The Choice by Robert Whitlow for review and from the first chapter was addicted. I wanted, no I needed, to know what was going to happen next. It was a wonderful book. Whitlow created a dramatic storyline with characters that you come to really care for.

In the story Sandy becomes pregnant and has the difficult choice of what to do next. From the moment her choice is made, we see how it affect the future, not only of hers but of those around her.

I hate to give spoilers, so it's really hard for me to say anything else. But just let me say that the twists and turns that come are amazing. You will laugh, cry and really feel the pain and hope the people are experiencing.

One young woman. Two very different roads. The choice will change everything.

Even as a pregnant, unwed teen in 1974, Sandy Lincoln wanted to do the right thing. But when an ageless woman approached her in a convenience store with a mysterious prophecy and a warning, doing the right thing became even more unclear. She made the best choice she could . . . and has lived with the consequences.


More than thirty years later, a pregnant teen has come into her life, and Sandy’s long-ago decision has come back to haunt her. The stakes rise quickly, leaving Sandy with split seconds to choose once more. But will her choice decision bring life . . . or death? 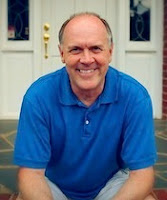 Meet the Author:
Robert Whitlow is the best-selling author of legal novels set in the South and winner of the prestigious Christy Award for Contemporary Fiction. A Furman University graduate, Whitlow received his J.D. with honors from the University of Georgia School of Law where he served on the staff of the Georgia Law Review. A practicing attorney, Whitlow and his wife, Kathy, have four children. They make their home in North Carolina.

For more about Robert and his other books, visit www.robertwhitlow.com.

I was truly amazed at how well a man was able to write from a woman's perspective. He did an amazing job. You need to go and get The Choice to read for yourself!

It can be purchased on the Thomas Nelson website as well as retail sites such as Amazon and Barnes & Noble.

You can read more reviews of The Choice from other blog tour members by clicking here.


*I received this book free for review from Litfuse Publicity Group & Thomas Nelson. All opinions stated are my own and were in no way influenced.*