When I was growing up one of the cartoons my sister and I watched was Jem & the Holograms. We loved the awesomeness that Jem presented. She was exciting and fun and who didn't love her music? I think we all wanted her magic earrings. 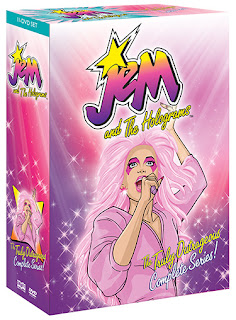 Now this series is being released on DVD. You can get the complete series or Season 1. I received Season 1 for review. Boy, did it bring back the memories!! It was so fun to watch her and remember the fun of many years ago.


JEM and The Holograms:
The Truly Outrageous Complete Series!
Packed with All 65 Original Episodes and All-New Special Bonus Content to be available in a Collectible 11-DVD Box Set
ROCKIN’ ONTO HOME ENTERTAINMENT SHELVES EVERYWHERE OCTOBER 11, 2011 FROM SHOUT! FACTORY
JEM and The Holograms: Season One 4-DVD Set will be available to own on the same day!
America’s best-loved and truly outrageous animated pop star was Jem from the memorable 80’s pop culture series JEM and The Holograms. Best known for her iconic pink hair, star shape earrings, rousing musical numbers and trend setting fashion, Jem knew how to rock her glamour, glitter, fashion and fame and influenced a generation of viewers who grew up watching this animated series.

On October 11, 2011, Shout! Factory, in collaboration with Hasbro Inc., will release the long-awaited JEM and The Holograms: The Truly Outrageous Complete Series! 11-DVD box set, sparkling with all the episodes in the order they were intended and an exclusive extra DVD packed with bonus features, including archival material rarely seen by fans! Poised to present a hard-to-refuse offer for loyal fans, this uncompromising 11-DVD box set is collected in a specially designed box and will be made available in stores nationwide. Also available to own on the same day is the single season DVD debut of JEM and The Holograms: Season One in a 4-DVD box set.

The series “JEM and The Holograms” ran from 1985-’88 in first-run syndication and still boasts a loyal and vocal fan base. It is frequently credited with influencing fashion in the late 1980s and beyond, and launching the careers of female pop-rock stars and music groups. The series follows Jerrica Benton, whose discovery of Synergy, a powerful computer companion, allows her to transform from co-owner of Starlight Music into rock star Jem. Teaming with her sister and best friends who form The Holograms, Jem sets out to make their musical dreams come true, even as she battles against the ruthless Eric Raymond and his musical protégés.

Here are some coloring sheets for your little girl! Just click on the picture below to get the PDFs. 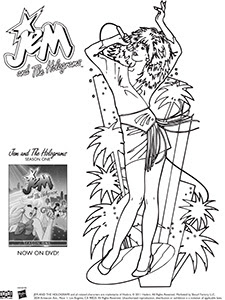