Clash of the Titles is proud to announce that author Marianne Evans with her novel, Hearts Crossing, is our newest champion! 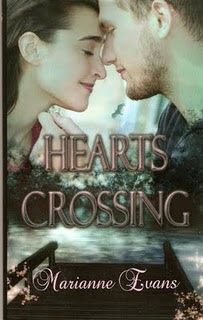 About the book:
Collin Edwards, a former parishioner at Woodland Church, has renounced God without apology, his faith drained away in the face of a tragic loss.Daveny Montgomery cares deeply about her relationship with God, and the community of Woodland. Lately though, she's been in a rut, longing for something to reignite her spiritual enthusiasm.A beautification project at Woodland seems the answer for them both. Daveny spearheads the effort and Collin assists, but only with the renovations, and only because he wants to know Daveny better. Despite his deepening feelings for her, even stepping into the common areas of the church stirs tension and anger.Can Daveny trust in Collin’s fledgling return to faith? And can Collin ever accept the fact that while he turned his back on God, God never turned his back on him?

Marianne competed with the
Adam and Andrea Graham, and their YA book Tales of the Dim Knight.

What readers said:
A glimpse at Marianne's winning excerpt:
Officer Lance Edwards banged hard on the front door of the home. A cacophony of sound increased. “Saint Clair Shores PD. Open up.” Seated in the squad car, Collin Edwards watched his brother cast a quick glance back at the squad car then up and down the street.
Lance trotted back to the vehicle, opening the door. “I'm calling for back up.” He was laser focused. “Stay where you are, and keep alert.”
“Yeah. Got it.” Collin frowned as Lance barked into the car radio and activated the roof top light bars. He left the car to return to the front door.

This time the door was yanked open. A hulking, angry man filled the entrance.

“Step outside, sir.” Lance rested a hand against the butt of his gun.
READ FULL EXCERPT HERE

About her Clash Marianne said:

It has been an honor to "clash" with such a worthy opponent! :-) I love Clash of the Titles.
Next week, April Gardner hosts a special "Author's Choice" Clash. Anything goes with this one--authors chose their favorite excerpts from their own works to submit, and we narrowed it down to the top two for readers to vote on. Spread the word!
-April W Gardner is the Sr. Editor at Clash of the Titles
and author of Wounded Spirits.