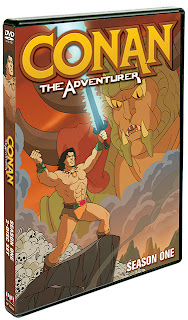 Animated Adventures For The Whole Family!

CONAN THE ADVENTURER: SEASON ONE
Featuring Over Five Hours of Content in a 2-DVD Set

IN STORES NATIONWIDE FROM SHOUT! FACTORY ON JULY 26, 2011

By Crom! Let the acolytes of Conan rejoice as the fiercest Barbarian to ever roam the Earth arrives in this complete Season One DVD release! Join in the fray as Conan and his fellow adventurers — Jezmine, Snagg, Needle, Greywolf and Zula — quest to rescue Conan’s family from an evil spell cast by the Serpent Man wizard Wrath-Amon. Armed with a powerful sword forged from Star Metal and faith in his god Crom, Conan will not stop until his family is safe and the evil wizard is reimprisoned in the mystical Abyss!

On July 26, 2011, Shout! Factory, in collaboration with Hasbro, Inc., will unleash Conan The Adventurer: Season One in a 2-DVD set, featuring all 13 action-packed episodes. Featuring the legendary warrior well-known from books, comics and movies, Conan The Adventurer: Season One is a must-have. This DVD set promises to keep you on the edge of your seat with exciting exploits and is priced to own at $19.93 SRP.

Produced by Sunbow, the 1980s animation giant behind Hasbro’s Transformers and G.I. JOE: A Real American Hero, Conan The Adventurer originally aired in Saturday morning syndication beginning in 1992 transitioning to a daily airing throughout 1993 in the second season.

Season One Episode List:
Disc 1
The Night Of Fiery Tears
Blood Brother
Star Of Shadizar
Conan The Gladiator
The Heart Of Rakkir
Men Of Stone
The Terrible Torrinon

My thoughts: This was a husband and son favorite. Matthew was excited at the artwork on the DVD and of course hubby was just excited. It is a great father/son bonding moment. Loved it!

Below is a video of characters...