We got this about 2 weeks ago for review and it is so cute. Gracie has an obsession with chihuahuas and so this was right up her alley. :)We had watched the first one ... over and over. I was glad for a change. I surprised her one day after school. She saw it and screamed "NO WAY! Mommy, how'd you get it so soon?!" She was so happy and I about cried. It's a really good movie and we enjoyed it immensely. 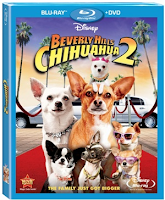 AY CHIHUAHUA…THE FAMILY JUST GOT BIGGER!
AMERICA’S FAVORITE LITTLE CHIHUAHUA’S ARE BACK
FOR AN ALL-NEW DOGGIE-PACKED ADVENTURE IN
Available on Blu-ray™ Combo Pack & DVD – February 1, 2011
Walt Disney Studios Home Entertainment (WDSHE) proudly announces the return of the greatest Chihuahuas to walk on all fours in Beverly Hills Chihuahua 2! Chloe & Papi are back in an all new, ¡Ay yay yay! fun-filled adventure—and their family just got bigger. Meet their rambunctious, mischievous and hilarious litter on February 1, 2011 when Beverly Hills Chihuahua 2 comes out on a Blu-ray™ combo pack (include Blu-ray and DVD of the movie), 1-disc DVD.

From the creators of Beverly Hills Chihuahua, everybody’s favorite talking Chihuahuas are back in a comedy that’s a pack of outrageous fun for the whole family. Puppy mayhem turns the lives of newlywed Chihuahua parents, Papi and Chloe, upside down when their playful puppies present one challenge after another. But, when their human owners find themselves in trouble, the tiny pups will stop at nothing to save them—because in good times and hard times, the family always sticks together. Papi, Chloe and the puppies embark on a heroic adventure, proving once again that big heroes come in small packages.

Featuring an all-star cast, including George Lopez (voice of Papi), and complete with a litter of bonus features, this heartwarming tale of the meaning of family, friendship and loyalty is a special breed of fun—times five.

To provide consumers with unprecedented quality, value and portability of their favorite Disney classics, in 2008 WDSHE pioneered the Combo Pack – a Blu-ray Disc plus a DVD in a single package. Current Disney Animated Classic titles available as Combo Packs include Sleeping Beauty, Pinocchio and Snow White and the Seven Dwarfs.


Disney Movie Rewards currently has a $10 off coupon for the Beverly Hills Chihuahua 2 Combo Pack! 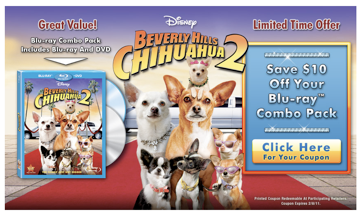