I haven't watched The Muppets in forever. This should be good!


THE MUPPETS
When Walter, the world's biggest Muppet fan, and friends Gary (Jason Segel) and Mary (Amy Adams) discover the nefarious plan of oilman Tex Richman (Chris Cooper) to raze the Muppet Theater, they help Kermit reunite the Muppets to stage The Greatest Muppet Telethon Ever and raise the $10 million needed to save the theater. 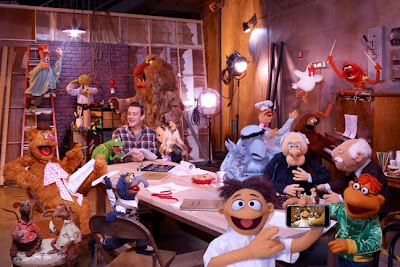 On vacation in Los Angeles, Walter, the world's biggest Muppet fan, and his friends Gary (Jason Segel) and Mary (Amy Adams) from Smalltown, USA, discover the nefarious plan of oilman Tex Richman (Chris Cooper) to raze the Muppet Theater and drill for the oil recently discovered beneath the Muppets' former stomping grounds. To stage The Greatest Muppet Telethon Ever and raise the $10 million needed to save the theater, Walter, Mary and Gary help Kermit reunite the Muppets, who have all gone their separate ways: Fozzie now performs with a Reno casino tribute band called the Moopets, Miss Piggy is a plus-size fashion editor at Vogue Paris, Animal is in a Santa Barbara clinic for anger management, and Gonzo is a high-powered plumbing magnate. With secret, signature, celebrity cameos, “The Muppets” hits the big screen Nov. 23, 2011.

Notes:
*Funnyman Jason Segel (TV’s “How I Met Your Mother,” “Forgetting Sarah Marshall”) stars in, co-writes and executive produces “The Muppets.”
*“The Muppets” is directed by James Bobin, who was a director/writer/EP for HBO’s “Flight of the Conchords.”
*Kermit received a star on The Hollywood Walk of Fame in 2002. His song “The Rainbow Connection” was nominated for an Academy Award®.
*Bret McKenzie, who starred in, wrote for and served as composer for HBO’s “Flight of the Conchords,” is the music supervisor for “The Muppets,” as well as the writer/producer on some of the songs, which include big Muppet-style opening and closing numbers.
*It’s been 11 years since the Muppets’ last big-screen feature film.