Have ya'll seen this movie?

We LOVE it! Seriously the first day we watched it - Gracie and Matthew both watched it twice. And then the next day they watched it again. Now I'll admit I didn't watch it all the times they did and I was enjoying the peace and quiet such a movie brings me...but the parts I did catch were so funny!! 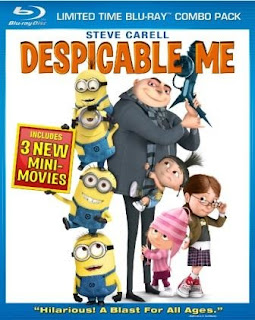 Universal City, California, December 15, 2010 – The world’s funniest evil genius saw his plans for world domination come true when Despicable Me made off with first-day sales on Blu-ray, DVD and digital download of nearly $25 million on December 14. Fueled by the exclusive debut of three all-new mini-movies on DVD Double Pack, Blu-ray Combo Pack and 3D Combo Pack starring the film’s wildly popular Minions, the mega-hit animated family comedy sold well over one million units to consumers (excluding rentals) in its first 24 hours of release and is poised to become the second biggest-grossing animated home entertainment title of the year.

“Despicable Me is one of the most creative, beloved and successful animated features of all time, as evidenced by its resounding critical acclaim and extraordinary global box-office earnings of over half a billion dollars,” said Craig Kornblau, President, Universal Studios Home Entertainment. “In providing consumers with exceptional all-new mini-movies and the greatest choice of platforms across DVD, Blu-ray and Blu-ray 3D, Despicable Me has rocketed to the top of everyone’s gift list and has assumed the coveted position as the must-own release of the holiday season.”

The title’s explosive first-day sales were also aided by Universal’s groundbreaking “Minion Madness” promotion, a points-based reward and social media program spotlighting the film’s beloved mischief-makers, the Minions. Fans can register to participate in creative interactive activities that earn points toward prizes ranging from gift cards to all-expense-paid vacations. To date, registered users have earned more than one million minion points and shared thousands of pieces of fan art, fan photos and more at www.minionmadness.com . Running through January 2011, “Minion Madness” will award more than 15,000 prizes to registered users.


Here's a Mini Movie for you!