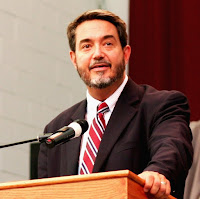 SCOTT HAHN was recently appointed as the inaugural Chair of Biblical Theology and Liturgical Proclamation at Saint Vincent Seminary (Latrobe, Pennsylvania). He is also professor of theology and Scripture at the Franciscan University of Steubenville. An internationally renowned lecturer, Scott is founder and president of the St. Paul Center for Biblical Theology and editor of the Center's academic journal, Letter & Spirit. He is the author of a dozen books, including The Lamb's Supper; Hail, Holy Queen; Swear to God; and Understanding the Scriptures. His scholarly articles have appeared in various academic journals, including the Journal of Biblical Literature, Catholic Biblical Quarterly, and Currents in Biblical Research. He lives with his wife, Kimberly, and their six children in Steubenville, Ohio.

AT MY FIRST MASS

THERE I STOOD, a man incognito, a Protestant minister in plainclothes, slipping into the back of a Catholic chapel in Milwaukee to witness my first Mass. Curiosity had driven me there, and I still didn’t feel sure that it was healthy curiosity. Studying the writings of the earliest Christians, I’d found countless references to ‘‘the liturgy,’’ ‘‘the Eucharist,’’ ‘‘the sacrifice.’’ For those first Christians, the Bible—the book I loved above all—was incomprehensible apart from the event that today’s Catholics called ‘‘the Mass.’’

I wanted to understand the early Christians; yet I’d had no experience of liturgy. So I persuaded myself to go and see, as a sort of academic exercise, but vowing all along that I would neither kneel nor take part in idolatry.

I took my seat in the shadows, in a pew at the very back of that basement chapel. Before me were a goodly number of worshipers, men and women of all ages. Their genuflections impressed me, as did their apparent concentration in prayer. Then a bell rang, and they all stood as the priest emerged from a door beside the altar.

Unsure of myself, I remained seated. For years, as an evangelical Calvinist, I’d been trained to believe that the Mass was the ultimate sacrilege a human could commit. The Mass, I had been taught, was a ritual that purported to ‘‘resacrifice Jesus Christ.’’ So I would remain an observer. I would stay seated, with my Bible open beside me.


As the Mass moved on, however, something hit me. My Bible wasn’t just beside me. It was before me—in the words of the Mass! One line was from Isaiah, another from the Psalms, another from Paul. The experience was overwhelming. I wanted to stop everything and shout, ‘‘Hey, can I explain what’s happening from Scripture? This is great!’’ Still, I maintained my observer status. I remained on the sidelines until I heard the priest pronounce the words of consecration: ‘‘This is My body . . . This is the cup of My blood.’’

Then I felt all my doubt drain away. As I saw the priest raise that white host, I felt a prayer surge from my heart in a whisper: ‘‘My Lord and my God. That’s really you!’’

In less than a minute, the phrase ‘‘Lamb of God’’ had rung out four times. From long years of studying the Bible, I immediately knew where I was. I was in the Book of Revelation, where Jesus is called the Lamb no less than twenty-eight times in twenty-two chapters. I was at the marriage feast that John describes at the end of that very last book of the Bible. I was before the throne of heaven, where Jesus is hailed forever as the Lamb. I wasn’t ready for this, though—I was at Mass!


I would return to Mass the next day, and the next day, and the next. Each time I went back, I would ‘‘discover’’ more of the Scriptures fulfilled before my eyes. Yet no book was as visible to me, in that dark chapel, as the Book of Revelation, the Apocalypse, which describes the worship of the angels and saints in heaven. As in that book, so in that chapel, I saw robed priests, an altar, a congregation chanting ‘‘holy, holy, holy.’’ I saw the smoke of incense; I heard the invocation of angels and saints; I myself sang the alleluias, for I was drawn ever more into this worship. I continued to sit in the back pew with my Bible, and I hardly knew which way to turn—toward the action in the Apocalypse or the action at the altar. More and more, they seemed to be the very same action.

I plunged with renewed vigor into my study of ancient Christianity and found that the earliest bishops, the Fathers of the Church, had made the same ‘‘discovery’’ I was making every morning. They considered the Book of Revelation the key to the liturgy, and the liturgy the key to the Book of Revelation. Something powerful was happening to me as a scholar and a believer. The book of the Bible that I had found most perplexing—the Book of Revelation—was now illuminating the ideas that were most foundational to my faith: the idea of the covenant as the sacred bond of the family of God. Moreover, the action that I had considered the supreme blasphemy—the Mass—now turned out to be the event that sealed God’s covenant. ‘‘This is the cup of My blood, the blood of the new and everlasting covenant.’’

I was giddy with the newness of it all. For years I had been trying to make sense of the Book of Revelation as some kind of encoded message about the end of the world, about worship in faraway heaven, about something most Christians couldn’t experience while still on earth. Now, after two weeks of daily Mass attendance, I found myself wanting to stand up during the liturgy and say, ‘‘Hey, everybody. Let me show you where you are in the Apocalypse! Turn to chapter four, verse eight. You’re in heaven right now.’’


In heaven right now! The Fathers of the Church showed me that this wasn’t my discovery. They had preached about it more than a thousand years ago. I was, however, convinced I deserved credit for the rediscovery of the relationship between the Mass and the Book of Revelation. Then I discovered that the Second Vatican Council had stolen my thunder. Consider the following words from the Constitution on the Sacred Liturgy:


In the earthly liturgy we share in a foretaste of that

heavenly liturgy which is celebrated in the Holy City of

Jerusalem toward which we journey as pilgrims, where

Christ is sitting at the right hand of God, Minister of the

sanctuary and of the true tabernacle. With all the warriors

Lord; venerating the memory of the saints, we hope for

some part and fellowship with them; we eagerly await the

Savior, our Lord Jesus Christ, until He, our life, shall appear

and we too will appear with Him in glory.

I found myself trying hard to go slowly, cautiously, careful to avoid the dangers to which converts are susceptible; for I was fast becoming a convert to the Catholic faith. Yet this discovery was not the product of an overwrought imagination; it was the solemn teaching of a council of the Catholic Church. In time, I would discover that it was also the inevitable conclusion of the most rigorous and honest Protestant scholars. One of them, Leonard Thompson, has written that ‘‘Even a cursory reading of the Book of Revelation shows the presence of liturgical language set in worship. . . . [T]he language of worship plays an important role in unifying the book.’’ The images of liturgy alone can make that strange book make sense. Liturgical figures are central to its message, Thompson writes, revealing ‘‘something more than visions of ‘things to come.’ ’’


The Book of Revelation was about Someone Who was to come. It was about Jesus Christ and His ‘‘Second Coming,’’ which is the way Christians have commonly translated the Greek word Parousia. Through hour after hour in that chapel in Milwaukee in 1985, I came to know that that Someone was the same Jesus Christ Whom the Catholic priest lifted up in the host. If the early Christians were correct, I knew that, in that very moment, heaven touched down on earth. ‘‘My Lord and my God. That’s really You!’’

Still, serious questions remained in my mind and heart—about the nature of sacrifice, about the biblical foundations of the Mass, about the continuity of Catholic tradition, about many of the small details of liturgical worship. These questions would define my investigations through the months leading up to my reception into the Catholic Church. In a sense, they continue to define my work today. These days, however, I ask not as an accuser or a curiosity seeker, but as a son who approaches his father, asking the impossible, asking to hold a bright and distant star in the palm of his hand.

I don’t believe Our Father will refuse me, or you, the wisdom we seek regarding His Mass. It is, after all, the event in which He seals His covenant with us and makes us His children. This book is more or less a record of what I have found while investigating the riches of our Catholic tradition. Our heritage includes the whole of the Bible, the uninterrupted witness of the Mass, the constant teachings of the saints, the research of the schools, the methods of contemplative prayer, and the pastoral care of the popes and bishops. In the Mass, you and I have heaven on earth. The evidence is overwhelming. The experience is a revelation.