Set to be released by TOUCHSTONE Pictures
on February 11, 2011 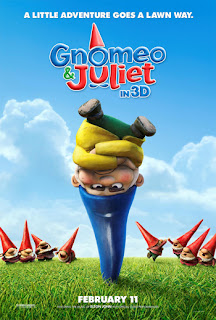 The greatest love story ever told, starring...garden gnomes? In the upcoming “Gnomeo & Juliet,” Shakespeare's revered tale gets a comical, off-the-wall makeover. Directed by Kelly Asbury (“Shrek 2”) and showcasing both classic and original songs by Elton John, the film features the voices of James McAvoy and Emily Blunt as Gnomeo and Juliet, who have as many obstacles to overcome as their quasi namesakes when they are caught up in a feud between neighbors. But with plastic pink flamingos and thrilling lawnmower races in the mix, can this young couple find lasting happiness?

Two garden gnomes, Gnomeo (voice of James McAvoy) and Juliet (voice of Emily Blunt), try to avoid tragedy and find a happy ending to their star-crossed love affair when they are caught up in a feud between neighbors.