Today's Wild Card author is:
Holly Weiss
and the book:
Crestmont
Star Publish (April 1, 2010)
***Special thanks to Holly Weiss for sending me a review copy.*** 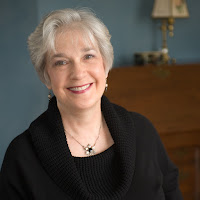 Holly Weiss is a vocal instructor, retired professional singer and a member of the National Association of Teachers of Singing. A polio survivor, she lives in upstate New York with her husband. Crestmont is her first novel.

People buzzed around the Allentown train station the next day, stopping only to check departure times or to collect their children and suitcases. Gracie bought her ticket, hurriedly counting the rest of the money in her purse. Selecting a magazine called Time from the newsstand next to the ticket counter she leafed through it, lingering over an article about President Coolidge.

“Watch it, Missy,” growled a man pushing a huge steamer trunk on a dolly. She jumped out of the way and hastily handed the vendor the money for the magazine and a Milky Way candy bar. Thinking she might feel less overwhelmed outside the station, she checked the board for the departing platform for the Wilkes-Barre train and dodged her way out of the terminal.

On the platform, people were crammed into each available seat, but quickly rose to board when the train to Philadelphia was announced. Gracie sat down alone, set her red suitcase between her legs, and wolfed down the candy bar. She glanced distractedly at the cover of the magazine, realizing she hated the news and politics, but instructed herself to read it on the train to Wilkes-Barre so she could be better informed.

Ducking her head nervously when people filtered in to catch the next train, Gracie spied a book someone had abandoned called Sister Carrie. Quickly, she snatched if off the bench and browsed through it. The main character was a girl who wanted to go to Chicago and be a famous actress. Excited now that she had a friend with a similar goal to keep her company; she put it in her suitcase just as the conductor called “All aboard!” Nervously climbing the steep steps onto the train, she settled into a brown leather seat and opened the Time magazine. She tried to read, but remorse gnawed at her concentration like a woodpecker hammering her skull.

“Ne-e-xt stop, Wilkes Ba-a-are.” Clutching her red suitcase, Gracie stepped off the train with an unsettling combination of anticipation and fear. After consulting a man in a maroon uniform with a name tag on his breast pocket, she found the east entrance of the train station where she was to meet the Crestmont car. The clock on the wall said 10:45. Sitting on a bench in the sun, she nervously paged through her magazine while she waited.

A huge black Buick Touring Car pulled up to the curb with “The Crestmont Inn” painted on the side in yellow letters. A spindly man in his mid twenties climbed out. He was impeccably dressed in gray and black pinstriped trousers and a gray jacket. Gracie guessed the yellow of his tie had been chosen to match the lettering on the car. He was so skinny that she giggled, imagining herself pushing him over with one finger. He had a very prominent Adam’s apple, a broad forehead and a face that narrowed into a pointy chin.

Waving to someone behind her on the tracks, he shouted, “Dorothy, still keeping those students of yours in line?” His wide smile made Gracie relax a bit.

Shyly, she stepped forward. “Hello, my name is Gracie Antes. Is this the shuttle to the Crestmont Inn?”

“You must be the new girl.” He stuck out a bony hand. “I’m PT, driver, bowling alley attendant and gofer for Mr. Woods, Crestmont’s owner. Hop in.”

“Well, I don’t know. I mean, my interview is this afternoon. Will we make it on time?”

“Yup.” Feeling like she had been given an order, Gracie slid into the middle seat of the car.

The generously proportioned middle-aged woman he had called Dorothy ran from the platform to the car, straw hat flopping, struggling with a suitcase and hatbox. She threw her free arm around PT and kissed him loudly on the cheek. “Oh, my word, if it isn’t PT. Isn’t it a long time between summers?” He stashed her suitcase in the trunk along with Gracie’s, and Dorothy slid into the passenger seat in the front.

A sickeningly sweet odor of roses filled the car. Gracie discretely wound her window down a few inches to let in some air.

“I nearly missed my trolley to the station. Dear me, I am just neither here nor there without my car. I need to pick it up next week, PT, so I’ll be shuttling back here with you. Hello, there, dear,” she said, extending a hand back to Gracie. “I’m Dorothy, one of the antique waitresses.”

“Oh, please don’t ma’am me. My students do it all year and it makes me feel old. I need my Crestmont summers to liven up these forty-five-year-old bones. Call me Dorothy. Whew, it certainly is hot enough. Oh look, there’s Isaiah and Olivia. Yoo-hoo!” She beckoned to them from the car window. “All aboard the Crestmont shuttle.”

A burly man with skin like coal and big apple cheeks protectively ushered a dainty woman with copper skin into the car. The woman’s elegance and quiet nature made Gracie like her immediately.

“Guess that’s it for this run,” PT said, starting the engine.

After they introduced themselves, Isaiah pounded Gracie on the back and said, “One big happy family, right, Olivia?” He drew the palm of his wife’s tiny hand to his lips and kissed it. Sniffing suspiciously, he wrinkled his nose. “Lord Almighty, Dorothy, I hate that roses stink stuff you wear. Don’t you bring that smell into my kitchen, hear?”

“It’s imported Ashes of Roses eau de cologne, Isaiah,” she corrected him. “It was Lawrence’s favorite, bless my dear husband’s soul, and as long as Sears carries it, I will continue to wear it. And as far as your kitchen goes, there are so many aromas floating about no one will notice a little perfume. Besides, Mrs. Swett loves it and says so each summer when she hands me a fine tip.”

“I don’t know how you can be so hotsy-totsy to those old biddies in the dining room. They act like they run the place instead of Mr. Woods. You are crazy to take those tables near the lakeside windows, Dorothy. Why, you have to deal with all three of them at once, plus two husbands. Who’s that one always feeling like she’s sick—Mrs. Pennyswoon?”

“First of all, Isaiah,” Dorothy instructed, “if you ever stepped out of your kitchen you would see that the west window tables afford a commanding view of the lake and are therefore reserved for our, shall we say, more faithful, well-to-do guests. Secondly, Mrs. Woods has graciously assigned them to me because she feels I have the maturity and skills to mitigate some of their outlandish behavior.”

“Dorothy is good at keeping the Rude Regals in line, so Mrs. Woods gives her the tables where she gets really great tips.”

“Oh, my word, I simply am beside myself when I hear people call them the Rude Regals. They are people with problems, just like you and me. Mrs. Pennington’s ailments are an indication that she needs some attention. Miss Woodford simply feels she is of a higher station than anyone else. If I can show some special attention or give deference to make someone happy, then I will do it. Besides, I find it a challenge to use my people skills on a higher level with the adults at the Crestmont than with my elementary students.”

The more everyone else talked, the more Gracie knew it would take some doing to feel like she fit in. Her stomach grumbled, and she wished she had bought more than a candy bar for lunch. The clouds she watched from her window glided like wavy streamers in the sky. As they motored toward the Crestmont, her eyes got heavy. Realizing that she would need a lot more energy before the day was over; she turned her head toward the window and tried to sleep. “Dear God,” she prayed, “Please make this be all right. If I was wrong to do it, then turn it for good.”

After a long drive, PT slowed the car when they passed through stone pillars on either side of the Crestmont driveway. They ascended a steep hill to an immense three-story brown building with yellow awnings. PT parked the car. Gracie stood nervously by while the others grabbed their luggage and dashed off in a flash, saying, “See you soon!”

“Come on, I’ll show you to Mr. Woods’ office,” PT said, lifting Gracie’s suitcase out of the trunk. Gracie took in the immensity of the porch as they walked up the center steps. Once they were inside the striking lobby area, PT pointed to a huge grandfather clock. “That’s my favorite. Name’s Old Tim,” he explained. “Mrs. Woods’ father had it shipped from England when he built the place.”

Gracie’s heart started to flutter. Oh, honestly, what had she gotten herself into? She tried not to trip over her own feet.

PT knocked on an office door, flicked his eyes toward it and said, “They’re swell people. Good luck.”


My thoughts:
This was an excellent story! I really enjoyed reading the history in the book along with the story. The characters were very enthralling and I would recommend it to anyone looking for an interesting read.:)