The Mark of Love Bracelet Giveaway

The Mark of Love

The Mend Mark tells a powerful story in two words
Have you been “Marked?” The Mend Mark is a mission, a movement, an entire revolution. It is a bracelet meant to remind its wearers of Christ’s love and sacrifice, and its message is the passion of its creator, Hunter Harrison. 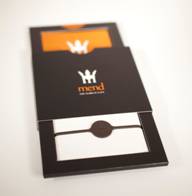 The Mend Mark is an innovative and distinctive bracelet that is designed to reflect the scars and nail holes of Jesus. When worn, the band resembles the deep holes of the nail driven into the wrists of Jesus during his crucifixion. By bringing the story of Jesus’ life and death to constant awareness by wearing a bracelet, Mend Mark is meant to powerfully remind wearers of the ultimate act of love Jesus made for all of humankind.
Harrison’s mission is to remind all to remember Christ’s love in both his life and death. But more than only a poignant recollection, the Mend Mark is meant to inspire and motivate wearers to live a life of service. Harrison strives to bring people together around the simplicity and power of love as lived by Jesus. But this is no example of passive love. The Mend Mark calls individuals in all walks of life to love with a profound sincerity and commitment great enough to change a neighborhood, a community, a world.
Harrison leads this call to love and sacrifice by example and joins hands with each Mend Mark bracelet purchaser to take the first step in global change. A portion of each bracelet sold goes to support Living Water International, an organization combating the clean water crisis victimizing over one billion people worldwide. Each $5,000 given will result in one well drilled, providing a community with clean water.

But wearers should be prepared to be seen. Unique in its design, the Mend Mark is sure to be noticed and gives wearers an opportunity to share the story of the profound love of Jesus for each and every person. “It was important to me that the design was simple and generic enough that the observer had to ask about it to know what it meant. But I also wanted it to appear distinctive enough that it sparked curiosity,” reveals creator Hunter Harrison. “I wanted it to require the wearer of the product to engage in conversation about the love of Christ (and hopefully show that love to others) instead of just letting the product talk for them.”
Launched in late 2009 after a year and a half of packaging, material, and design development by Harrison, the bracelet has been sold across the United States, Canada, and the UK and has been featured in retail stores as well. The Mend Mark bracelet movement has grown to further fame after being worn during performances by American Idol winner Lee Dewyze, Idol runner up Siobhan Magnus, Decifer Down, Israel Houghton & New Breed, Pillar, and Finding Favour, to name a few. Says Harrison, “I want it to be more than just another bracelet; I want it to represent a movement.” Based on the way things are going, a movement is exactly what it is becoming.
GET YOURS NOW!
BUY IT: Order online for $9.99 at www.mendmark.com.
WIN IT: I'm giving away one bracelet to some lucky reader! All you have to do is enter is leave a comment below telling me why you want to win.
Giveaway ends November 7th at 11:59 PM EST. Winner will be chosen using Random.org.
*Disclaimer: I was provided bracelets (one for me, one for giveaway) from Audra Jennings at The B&B Media Group for hosting this giveaway.*