I received some Sugar Free Ring Pops in the mail last week and it was just me, Robby & Matt in the car. We had stopped to get the mail before going on to the grocery store. (You need to know this, trust me.) So Robby was like what's that package? And I told him I had received some Ring Pops to review. Immediately he wanted one, like the big kid he is. :) He chose blue, which is blue raspberry flavored.  He said it tasted like the regular ones and proceeded to get a blue mouth. So we get ready to go into the store and I said something about his blue mouth. He was like it's still blue? Ummm, yea, you just ate it. So see why you had to know about where we were going and such...I had to make my hubby look funny for his silliness. ;) I do love the big lug.

Anyways, that has NOTHING to do with this. Cause as a parent you already know suckers turn your mouth. :D The main objective of this post is just to let you know that Ring Pops has a new sugar free option and they taste great. 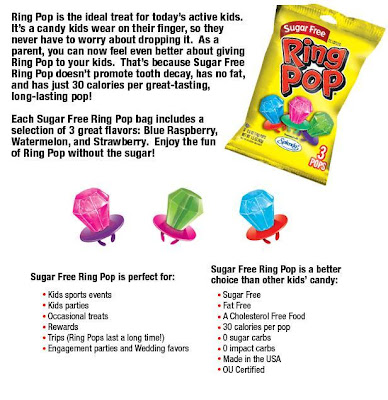 See the picture above that I so obviously stole from their website. It tells you all the great stuff about them .... but most of all kids love these things and now they're ok for them. You can find Sugar Free Ring Pops at Wal-Mart Stores nationwide.

Think your kid(s) would like them? Want to win some?

Yep, I have one 3pk. of Sugar Free Ring Pops to giveaway!

To enter:
Just leave me a comment below telling me which is your favorite flavor.


Giveaway will end on June 1st at 11:59PM EST. Winner will be chosen using Random.org.

*Disclaimer: I received a sample pack for review & giveaway for free for review. The opinion stated above is my own.*