A History of Christianity Review 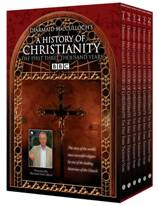 There are two billion Christians in the world today, a third of humanity—Protestant, Catholic, Orthodox, Pentecostal, and many more. Though Christians, by definition, are well-versed in the story of Christ and the apostles, many have given little thought to the details of their Christian heritage—the miraculous transferring of their faith from the first Christians huddled at Golgotha, across two centuries worth of cultures and languages, wars, and the rising and falling of empires. How did this small, obscure Jewish sect that preached humility and personal sacrifice become the biggest religion in the world? The answer will surprise you.

A History of Christianity: The First Three Thousand Years is a six-part series co-produced by the BBC, the Open University, and Jerusalem Productions and presented by Diarmaid MacCulloch, one of the world’s leading historians and Professor of History of the Church and Fellow at St. Cross College, Oxford. As MacCulloch reveals the true history of Christianity, he explores the question, “What does it really mean to be a Christian?”

MacCulloch is one of the most widely traveled Christian historians, and A History of Christianity is the first retelling of the Christian story that is truly global in scope. Filmed in high definition, A History of Christianity takes viewers on a 2,000-year odyssey that reaches the farthest corners of the world, from Palestine in the first century to India in the third, from Damascus to China in the seventh century, and from San Francisco to Korea in the twentieth.

The DVD set is available at retailers, including Sam’s Club. The series is also available on Amazon.com and www.ambrosevideo.com.

My thoughts:
First off I'm going to admit I don't know everything and at times I don't feel confident enough to express my beliefs. I'm still learning and growing. That's all I can say....

I do love researching the Christian religion. It is so fascinating to me. I will watch just about any show on tv that explores the past. I really enjoyed this DVD and liked how he explained the differences in denominations. That is something I've always wondered. How Christianity was broken apart into so many different types. I mean to me if you follow the Bible your Christian. Enough said. I guess it's all in interpretation. As with anything regarding religion, I would say before you watch you should pray that God opens your eyes and heart to the truth. Because I believe, as with many things, it can get lost in transition and again there is the interpretation thing. :)


*Disclaimer: I was given a copy of the DVD for review from The B&B Media Group. The opinion stated above is my own.*