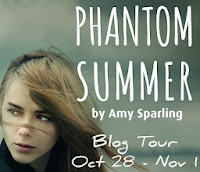 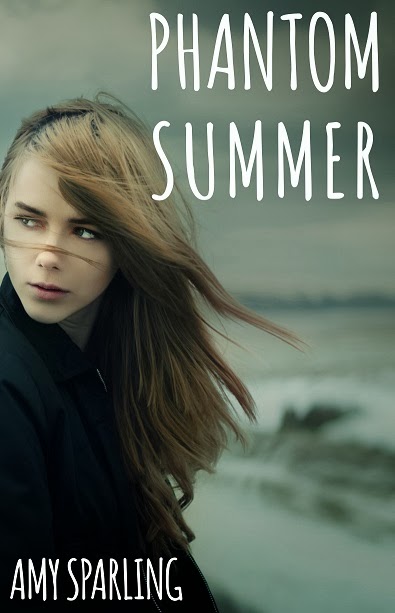 {blurb}
Seventeen-year-old Taylor Gray moves to Sterling Island to get over her dead boyfriend. Mom’s cool with letting her crash on the couch, but Taylor needs to get a job before the lights are cut off again.

When the tall, dark and crazy Raine Tsunami offers her a position at his thriving ghost tour business, she figures it’s an easy way to make some cash. Taylor isn’t afraid of ghosts--that crap is as fake as her mom’s boob job. She loves their adventures on the historic island, especially the secret places he shows her when the crowds go home. So what if all the ghost stories are just legends?

When Taylor comes face to face with a ghost and Raine crosses the line between friend and boyfriend--Taylor’s new life collides with her haunted past. If murdered people end up as ghosts, then that someone she was trying to forget is probably watching her.

{excerpt}
Half the streetlights are broken. Between tiny bursts of dingy light bulbs, everything is black, black, black. This isn't what Sterling Island is supposed to be about. The commercials call it a place for tourism and historical richness. What a joke. The only thing I've seen for blocks is buildings and parking lots and nothingness.
A rock tumbles across the sidewalk in front of me.
"You aren't from around here."
I freeze. The voice came from my right. At least I think it did. It happened so suddenly, and I was lost in a daydream that I hadn't really known what happened until after I heard it. I squint to see under the bright street lamp overhead. "So?" I shoot back, trying to sound sarcastic and so not intimidated. Footsteps come from the darkness. He's walking down stairs, one at a time by the sound of it, like he's placing both feet on each step before he takes the next one. I still can't see him.
I spit my gum on the ground, all gross and man-like. If I look unattractive then I won't be kidnapped. But if he even tries, he'll be sorry when he gets a Ford key in the eyeball. A shadow appears under the glow of the street light. It's small and thin. It doesn't look like it belongs to a mass murderer. I breathe a little easier.
"No girl around here would visit The Face by herself."
"The Face?" I ask. I chance a look around me and see nothing but buildings and a parking lot with one car parked in it. Why hadn't I noticed that car before?
The shadow takes a few steps closer and stops four feet away from me. He's about my age, maybe a little older. There's something weird about him, and it's not just because his clothes are so black it makes his head appear to be floating in the darkness. He's really…sharp. His face is unreadable. His features are so sharp and precise they almost scare me. His hair looks like it was just cut, all sharp ended and straight.
"Turn around," he says, pointing behind me.
I know there’s nothing but a big gray building behind us. It's several stories tall and has no windows. I have no idea why he tells me to turn around, but I do. And I see it immediately. Dark gray on the gray wall, it's like a portrait of a man from long ago. He has bushy hair and long sideburns and a stern look on his face.
"Holy shit," I say. The guy with his crisp shiny leather jacket and silky black hair is suddenly right next to me. I watch him as he looks at the face on the wall. He smirks.
"It's always here," he says. "Though sometimes it moves."
"What, like a movie?" I ask, realizing how stupid I sound.
"No, its position on the wall. You see the upper left corner?" I look where he's pointing. The wall there is shiny, not textured like the rest of the wall. "Yeah."
"That's where he first showed up. They sand blasted it off, and then he appeared over there." He points to the bottom of the wall to another shiny spot of concrete.
"No way," I say. The face on the wall is so realistic. It looks like someone spray painted it with a can of primer and a stencil. "Who's doing it?"
He looks sideways at me, searching my eyes as if he can't possibly believe that I don't know the legend of how this painting got on the wall. From this angle he kind of looks like one of those models in fashion magazines. He's slightly too thin for a guy, entirely too clean and although I can’t believe I’m going to say it, chiseled. Chiseled like some kind of freaky serial killer. I bet he's an asshole. He's probably making all of this up just to screw with me.
"No one does it, it just is."
"So it's like paranormal?" I snort.
"You really aren't from around here."
I pull out my ponytail and redo it. "Well that's a good thing I guess, since people around here believe in shit that doesn't exist."
"It would be terrible to go through life not believing in things that are right in front of your eyes."

{about the author}
Amy Sparling is a native Texan with a fear of cold weather and a coffee addiction that probably needs an intervention. She loves books, sarcasm, nail polish and paid holidays. She lives near the beach with her daughter, one spoiled rotten puppy and a cat who is most likely plotting to take over the world. Amy Sparling is a pen name for YA author Cheyanne Young.

{my thoughts}
I wasn't really sure what to expect with this book. I knew when I requested to be a part of the tour that it was YA and paranormal. I didn't know how I was going to feel about the storyline though. It seemed good but as we all know paranormal reads can either be really good or really bad. And this one was really good! I loved the characters. I felt the pain and despair that the young girl felt as she grieved the loss of her friend. I had a hard time putting it down to do anything else. I wanted to know what happened. I felt as if I were experiencing it all myself. It broke my heart and then healed it. Beautifully written!

Read more reviews on this tour - click on this link to see the full schedule of stops! http://oopsireadabookagain.blogspot.com/2013/09/blog-tour-invite-phantom-summer-by-amy.html