She’s a water Elementalist, the strongest of her dwindling kind. She creates steam to provide energy to fuel Dome Three: the only thing standing between humanity and an earth ravaged by World War III. No steam, no Dome. No Dome, no life.

Or so she thinks.

That is, until a mysterious man offers her a way out of having to donate steam. A way to escape the corrupt government of Dome Three. While the offer seems too good to be true, Avery is intrigued.

But when she arrives to her new home, she realizes the grass isn’t any less dead on this side of the fence. Instead, the lies are just hidden better.

When Avery enlists the help of her friends to uncover the truth, it may make her wonder if she was better off being a government tool than searching for freedom.

Some secrets are better left concealed, but humankind was never meant to live in a cage. And when you can control the most sought after resource, you can learn to control anything…including the fate of your world. 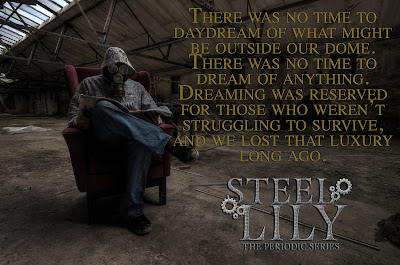 {excerpt}
I’d never seen anyone like him in Dome Four. His jawbone was strong, his cheekbones set high. His nose was regal and straight and when my gaze reached his eyes, my breath caught. Stormy blue-grey eyes that reminded me of shale returned my gaze with seemingly genuine curiosity, if not a bit of humor. Strips of colored fabric were woven into his dreadlocked hair, giving it a wildly unique appearance that suited him. His smug expression made me realize he was enjoying this.
“Are you finished checking me out? If you’re not, that’s okay; I allow every new woman I meet a free five-minute gawking period. After that, it’ll cost you.”
Blood rushed to my face. I tore my eyes from his magnetic gaze and watched as he took a worn leather strap off his wrist. He pulled back his dreadlocks–deep brown streaked with blonde–into the strap. His devilish grin pulled his eyes tight at the corners. He was trouble incarnate. Trouble I may very well want to get into, given the right circumstances.
“You’re at five minutes and thirty seconds now,” he said in a purr as he leaned in toward me. I felt his breath against my cheek, and my heart raced. “I’m going to start taking payment, and I choose how that payment is issued.”
Before I could respond, Alice stirred groggily beside me. She rubbed her eyes as she sat up. “Where are we?”
“Good question,” piped Jaxon. “One that your friend here failed to ask, but it could have been because I rendered her speechless with my good looks.”
Alice moved to get a better look at him, but he emphatically covered his face, as though he were a vampire trying to block the sun. “Don’t look at me!” he cried, then grinned as he winked at me. “I don’t want to make two ladies swoon in such a short period of time. How would I entertain myself tonight?”
“You’re not that handsome,” I argued mulishly.
“There’s drool on your chin. Either you’re physically unable to keep your mouth shut, or I caused you to forget how. Since when I found you, you were drool free, I’m going with the assumption that it was me.” He fished in his pocket and offered me a piece of white silk. “Here, a handkerchief for your trouble.”

{about the author}
Megan Curd is a graduate of Northwestern College in St. Paul, Minnesota. While having always enjoyed reading any books she could get her hands on, Megan didn’t begin writing until a friend encouraged her to do so while in college.

When not writing, Megan enjoys spending time with her family and friends. She loves to snowboard and travel to new places, and doesn’t turn down the opportunity to play xBox with her brother and friends when it presents itself.

{my thoughts}
What a wonderful book! The characters are so well thought out and developed, the storyline is captivating. I can't wait to read more from Megan Curd. She has created a world that could very possibly be one day. She is imaginative and an excellent story teller. If you like the Dystopian genre you will really enjoy this book. You'll laugh, you'll cry and you will want more!