{about the book}
Skylla only knows that she has been kidnapped and held prisoner by the foreign invaders and their human allies. And that the world is ending. Or so the humans think. The invaders have made it clear that their arrival is one of hostile intent, and as their takeover spreads, so does the panic across the globe. No one knows how to defeat them, or if it’s even sane to try.

Jet, Skylla’s human captor, is up for the challenge, though. A traitor in Skylla’s eyes, he is working with them. But Jet has his own agenda; one that doesn’t include babysitting Skylla or helping the enemies. And as the human race struggles to keep the invaders from achieving their goal, Jet and Skylla’s paths collide to reveal the truth behind Skylla’s abduction.

The invaders are headed for the water. Jet is headed for the water. But that’s the last place Skylla wants to be. That’s where the future of humanity lies, and where the bridge to their yesterdays was burned. On a mission to take back what is rightfully theirs, Earth’s population is determined to make sure this isn’t the end. But some endings were never theirs to begin with.

*Recommended for ages 17+ due to sexual situations, language, and mature subject matter*

{excerpt}
The quiet drone of a train’s chugging grew louder as it approached but was still eerily muted, a graceful ghost passing in the night. Minimal light shone from the front car as Jet stepped forward to align himself with its path.
“How do we know where it stops?” I asked, positioning myself next to him.
“We don’t.”
“So …”
“So we have to make a run for it.”
“You mean jump?”
“Yup.”
“As in … jump onto a moving train.”
“Yup.”
“This is crazy.”
“A dangerously disturbing level of crazy. No worries, baby.” He patted my shoulder with a smartass grin. “It’s just your area of expertise.” I narrowed my eyes at him, storing that one away for a future retaliation jab of my own.
Adrenaline spiked as the train grew closer, every nerve ending a live wire to the heart pounding violently in my chest. Jet grabbed my hand, glancing at my gun. “I’ll go first. Once I get a good grip, I’ll haul you up. Whatever you do, don’t stop running. And don’t let go.”
“I should go first,” I raised my voice to speak over the rumbling of the track. “You’re hurt. You’re going to need upper body strength.”
“I’m fine. Don’t fight me on this.”
Blood pounded hot in my ears, my heart rate jumping and hair blowing wildly around my cheeks as the train began to whizz by. The rush in my veins propelled me forward the moment I spotted an opportunity, and I launched into a controlled sprint. Springing upward, I lunged forward and latched on to the side of the car, the metal handle slipping beneath my sweaty grip. I shrieked and latched on harder, hearing Jet’s voice thunder behind me. The train’s vibrations rattled against my chest, sending my senses on high alert.
Clenching the handle until my knuckles hurt, I bit down on my lip to ease the tension and yanked hard to the right, feeling a heavy latch click and shift beneath my fingers. The door slid open and I hauled myself up and inside, grabbing onto the side of the frame to steady myself before flipping around to reach for Jet. He was running full speed after me, his arms pumping tight and sharp at his sides as he tore forward.
“Come on!” I yelled, extending one arm. It only took him a few seconds to catch up, his agile form sending his body off the ground and up onto the car before I could blink. With a loud shout, he clamped onto my arm, his other hand flying over his chest to cradle his gun. I was thrown onto my back with a thud before I knew what hit me, his body covering mine with a crash that left me seeing stars.
“Fucking crazy woman!” he shouted over the rail’s relentless roar, louder now that we were level with it. “What the hell do you think you’re doing?” His heat pressed into me, his arms caging me in as he stared down into my eyes, his nose aligned with mine.
“Fulfilling my sole purpose to drive you mad, it seems.” I couldn’t help it. The rush sent me sky-high and an explosive laugh escaped my lungs. I shook beneath him, my breath heaving against his chest.
“Damn it, Skylla!” He dropped his head as he gasped for air. “Seriously!” he added for effect, but there was nothing serious in his voice now. He was laughing too, just as deep, just as euphorically as I was, and I decided right then that the sound of Jet’s laugh was almost as sexy as his full lips and ripped body.
“Wanna go again?”
“You’re reckless. I can’t even look at you.”
“You’re crushing me.”
His head lifted, those blue eyes settling on me as his laughter slowed. “You deserve it.”
My hand shifted and found his injured hip; my fingers brushed the bandage through his shirt. He flinched. “And you need to admit when you need help.”
Pushing himself up, he rolled off me and sat back on his heels, wincing and gripping his side, his lips pulling back and teeth visibly grinding with the motion. I sat up and scooted forward, mindful of the gaping railcar door. I reached up and slid it shut, slamming it with a loud grunt until I felt it lock into place. The loud rumble of the wheels hitting the track was muted now, but the rattling hum still thumped away from outside, filling the dimly lit car with a shaky buzz.
“I’m fine,” he said.
“Fine. Play it your way. I’m going to see if I can find you some medicine.”
I helped push him backward to prop him against the wall, peeling his backpack from his shoulders first. “Try and rest, I’ll see what I can find out.”
“I’m not letting you wander around these cars alone. Not fuckin’ happening.”
“If you don’t rest and get medicine for that wound soon, I’ll be stuck wandering everywhere alone. That ointment won’t cut it. You’re going to need antibiotics. It’s starting to get infected.”
His gaze snapped up to mine and held my stare. “Finger on the trigger.”
“Fire on your mark.” I smirked. 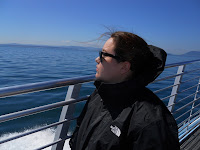 {about the author}
Rachael Wade is the Amazon bestselling author of The Preservation Series, The Resistance Trilogy, and the upcoming sci-fi series, The Keepers Trilogy. When she's not writing, she's busy learning French, watching too many movies, and learning how to protect animals and the environment. Visit her at www.RachaelWade.com and www.LightsOnOutreach.com, Goodreads, Facebook, or come chat with her on Twitter via @RachaelWade.

{my thoughts}
This is a great dystopian novel. I wasn't really a fan before the Hunger Games but now I can't get enough! This book has a cliffhanger (as it is a trilogy) so be prepared for being frustrated. But in a good way. You will want to read more about Skylla & Jet. Very easy read that will captivate you from the beginning!