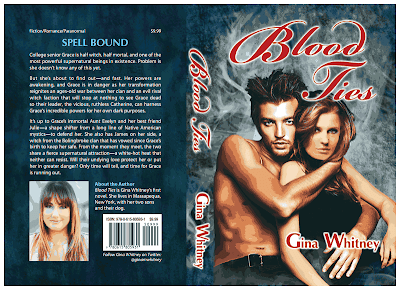 {about the book}
College senior Grace is half witch, half mortal, and one of the most powerful supernatural beings in existence. Problem is she doesn’t know any of this yet.

But she’s about to find out—and fast. Her powers are awakening, and Grace is in danger as her transformation reignites an ages-old war between her clan and an evil rival witch faction that will stop at nothing to see Grace dead so their leader, the vicious, ruthless Catherine, can harness Grace’s incredible powers for her own dark purposes.

It’s up to Grace’s immortal Aunt Evelyn and her best friend Julie—a shape shifter from a long line of Native American mystics—to defend her. She also has James on her side, a witch from the Bolingbroke clan that has vowed since Grace’s birth to keep her safe. From the moment they meet, the two share a fierce supernatural attraction—a white-hot heat that neither can resist. Will their undying love protect her or put her in greater danger? Only time will tell, and time for Grace is running out.

{excerpt}
“Don’t you have any feelings for me?” he asked, sounding sincere. His head was tilted down, his eyes looking up. He was coming to the painful understanding that I really did want his brother instead.
“No, I don’t have any feelings for you. Sorry.”
With those words I delivered a fatal wound to Adrian’s heart. It killed him to be rejected by the only woman he’d ever cared for. His emotions took a sharp turn, going from raw pain to unbridled fury. He pushed me backward with such force that I flew about fifteen feet.
“I have done nothing but love you since the day I met you. And you—you bitch—strung me along like a puppet. You are not getting away with that.”
Adrian pounced on me. He was heavier than his thin body suggested, and he weighed me down. He was turning into that monster I’d seen at the killing ritual. His nails started to claw up as he ripped my shirt apart, and left deep cuts. He kissed my chest savagely and covered my mouth so I couldn’t scream. My fangs came down, and I fought to open my lips so I could bite him. I tried to use telekinesis to get him off me, but my terrified state blocked it.
“I’m taking what’s due me,” he said with a little froth in the corner of his mouth. He ripped the zipper out of my pants as if it were made of papier-mâché. He moved his sweaty hand away from my mouth. I bit wildly at the air, hoping to land my teeth in his flesh.
During the wrestling match, I was able to slam Adrian in the nuts. He rolled off me, clutching himself. I staggered to my feet and booked it to the house. Meanwhile, Adrian fought through his pain, ran me down, and tackled me. I landed on my stomach with him on my back, a puff of dirt rising around us. He straddled me, his knees digging into the backs of my spread thighs. I thought they were going to break. When Adrian got full control over me, he got between my legs and started pulling my pants down. Then I heard the sound of his belt unbuckling.

{my thoughts}
Who doesn't love a good coming of age witch tale? I'm not being sarcastic. I seriously do love them. :) It's fun to read books where the main character is surprised by their life in some way or another. This book was really easy to read and so enjoyable. I am a paranormal fan of the biggest kind. It grabbed me from the first pages and kept me wondering what was going to happen next. It was a great book and if you like these types you definitely want to grab a copy now for yourself!