All for Hope by Olivia Hardin {book blitz}

{about the book}
To protect her heart, he left her behind.
To protect her life, he’ll leave the life he’s made behind.
Sometimes the safest distance between two hearts is no distance at all…

Kidnapping a baby wasn’t something Hope ever dreamed she would do. But she’s been burned by the legal system before, so when the court places her friend’s child into the custody of an abuser, she takes matters into her own hands. She steals the baby and fakes her death, hoping to make a clean getaway. She planned every detail, except one.

Her high school sweetheart and best friend, who left her years before, sees her at a gas station. Hope thinks all is lost, until he offers to help them.
Brennan had always been the love of Hope’s life, but he never wanted to be. She knows she cannot depend on him for long. However, as each day passes, it becomes painfully obvious that she is in way over her head. She goes with him, intending to keep him always an arm’s length away to protect her heart. But being on the run together sparks the old flames that once burned between Brennan and Hope.

Families, friends, and lovers must band together to save an innocent baby and a daring woman or both of their lives will be destroyed. Together, they’ll do it All for Hope… 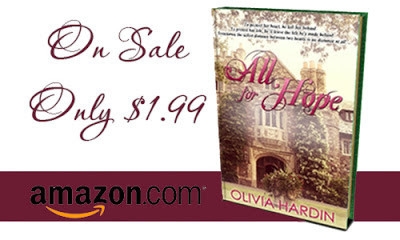 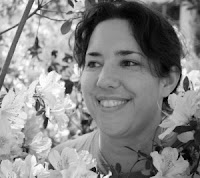 {about the author}
Olivia Hardin realized early on how strange she was to have complete movie-like character dreams as a child. Eventually she began putting those vivid dreams to paper and was rarely without her spiral notebooks full of those mental ramblings. Her forgotten vision of becoming an author was realized when she connected with a group of amazingly talented and fabulous writers who gave her lots of direction and encouragement. With a little extra push from family and friends, she hunkered down to get lost in the words. She’s also an insatiable crafter who only completes about 1 out of 5 projects, a jogger who hates to run, and is sometimes accused of being artistic, though she’s generally too much of a perfectionist to appreciate her own work. A native Texas girl, Olivia lives in the beautiful Lone Star state with her husband and their puppy Bonnie.