{about the book}
Shuffled from place to place in the foster system, Morrigan doesn't know the meaning of home. Plus, she is different. She has power over fire, the ability to move objects with her mind, and glimpse into the future. Just when she believes her life can’t get any stranger, she discovers her true identity.

Filtiarn, a knight with a dark past and a surprising secret, has been tasked with guiding the heir of Tír na NÓg through countless perils to be returned to her family. Once Morrigan has been reunited with her mother and grandmother, their triad can save the forgotten land of magic from being devoured by an ancient evil.

“Guardians!” A low snarl emanated from the back of his throat. “What are you doing with Guardians?”

Morrigan wasn’t sure who she was addressing, the man or the animals. Luckily, they both obeyed her command. She stepped in between them to avoid any further confrontations. The cats took a seat on either side her legs, but their posture hardly relaxed. They still glared warily at the newcomer, even though their hisses died down to an occasional soft growl.

“Dirty, filthy beasts!” Tiarn snarled as he climbed to his feet. “I hate Guardians.”

“Just cats! Hah!” He was standing at a careful distance, even though they had started licking their paws nonchalantly. “They are much more than simple cats! Though even those I find distasteful.”

Morrigan narrowed her eyes. “What do you mean?”
“Never mind. It does not matter.” Tiarn dismissed her question with a wave of his hand. “They are not coming with us.
“They most certainly are coming!”

Tiarn growled again. “I beg to differ with you, Your Highness. They would only get in the way. Possibly even get killed.”
Danu raised her head from her grooming to hiss at him again, as though she had taken that last statement as a personal threat. The strange reaction of her faithful sidekicks made Morrigan wonder again just how much Tiarn could be trusted. She also wondered why, when she wasn’t sure she could trust him, she still felt the undeniable urge to wrap her arms around his neck and kiss him.

“If they stay here alone, they’ll definitely get killed or at least sent to the pound,” Morrigan told him. “I can’t let that happen. So, they’re coming. End of story.”

Tiarn’s eyes flashed dangerously, and he looked like he wanted to argue, but thought better of it. “Very well, Princess. Bring your mongrel felines. Just keep in mind that Guardians and lycans do not mix well.”

A sick feeling started to settle in her stomach, as the truth of his words sunk in. It all started to make sense—his hairy arms and chest, his reaction to the cats, even his earlier comment about smelling her out. Her dark knight had a much darker side than she had ever seen in her dreams.

“Why yes, Your Majesty. Did you not realize? You are a witch and a sorceress. And I, your faithful traveling companion, am a lycan—a werewolf.” 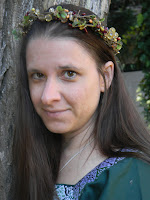 
Laura “Luna” DeLuca lives at the beautiful Jersey shore with her husband and four children. She loves writing in the young adult genre because it keeps her young at heart. In addition to writing fiction, Laura is also the editor of a popular review blog called New Age Mama. She is an active member of her local pagan community, and has been studying Wicca for close to eight years. Her current works include Destiny, Destiny Unveiled, Phantom, Morrigan, Player, and Demon. 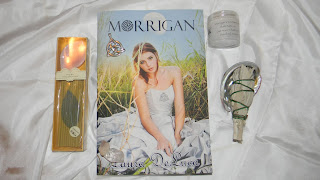 {my thoughts}
Oh my gosh! This was such an enjoyable read! It's genre is YA but I think anyone would enjoy it! I know I did. The book has a wonderful mix of characters that include witches, werewolves, and faeries. If you are looking for a well-written fantasy book, this is it! You're going to be taken into a world that as DeLuca describes it you'll be wishing you were there. It's almost magical. And well I guess considering it's witches...it fits well. Full of excitement and romance, it's an amazing book!!