EEK!!! K. Pinson just released the cover and synopsis for House of Cards, sequel to In Spades! 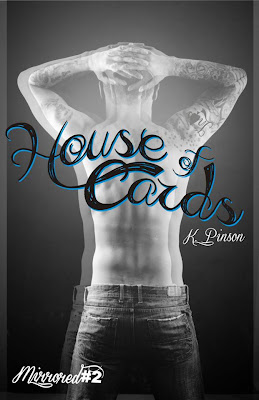 Daxton James holds the world in the palm of his hands. He finally met the love of his life and was more than ready to start a family with her and her precious daughter, Abby. He had the best friends that anyone could ask for, a career doing two things he loved the most-music and helping people and his family piecing themselves back together, slowly but surely. Everything had fallen into place in his life and he couldn't be more happy about it.

There is only one problem---He can’t remember any of it.

Daxton was involved in a serious accident which has left him fighting for his life, while his loved ones wait in the midst, unsure if he is even going to come out of it alive. Thankfully he does, but his short term memory can’t say the same. He only remembers the Daxton he had been years previous. The playboy, the rock star and hopelessly devoted to a woman that is not Avalynn Wright.

The doctors tell Avalynn to just let his memory come back on it’s own and to not push him too much, fearful that forcing his memory will cause permanent scarring and trauma. Avalynn is so thankful to have Daxton alive, that if letting him go will keep him happy and healthy, she will do just that, even if it means killing off herself; bit by bit. Avalynn struggles to grasp on what is a reality and what is created by the stresses of her life causing her to downwards spiral, with nobody to break her fall.

Will Avalynn and Daxton make it through this or is their relationship built only as strong as a House of Cards, ready to crumble at any moment?

If you haven't read In Spades yet head on over to Amazon and get your copy now!