The second book in Jessica Jaster's Delta Project series will be coming out soon and I have a special cover release just for you! 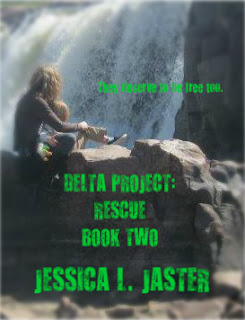 {about the book}
D005 has been a part of a secret government program known as the Delta Project her entire life. She has been genetically modified to be stronger, faster, smarter and to heal faster. Trained in hand-to-hand combat, weaponry and battle tactics, she has been worked to physical and mental exhaustion every day of her life. Raised without love or care of any kind, she has no idea what it means to be happy – to be free. And now she has run away.


After leaving the Hartman Ranch in order to keep her new friends out of danger, Weston embarks on a mission to save her brother and the other Deltas with the help of someone from her past. While at it, she will learn more about the Delta Project itself and what it is about the Deltas that makes them special.During her journey, she will be put in difficult situations. Will she be able to remain the caring, fun-loving Weston she became? Or will she revert to the cold, distant D005 of her past? And will she ever see Cormac or any of the others ever again?

You can read the first book in the series called Delta Project: Hide. It's only 99 cents on Amazon.