E.T. THE EXTRA-TERRESTRIAL on Blu-Ray!


E.T. THE EXTRA-TERRESTRIAL arrives on Blu-ray for the first time on October 9, 2012. 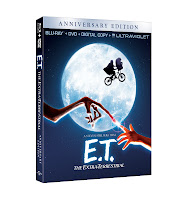 Can you believe that it has been 30 years since E.T. THE EXTRA-TERRESTRIAL first aired in theaters in 1982?! I feel so old! It seems like just yesterday it was coming out and was the blockbuster movie we all wanted to see.

“When E.T. The Extra-Terrestrial premiered in 1982, it captured the imaginations of people young, old and everyone in between in a way that was unparalleled in modernmovie history,” said Craig Kornblau, President of Universal Studios Home Entertainment. “A global cultural phenomenon—and the biggest box-office blockbuster of its day—E.T. brought out the child in all of us. We are thrilled audiences will now be able to experience the film in the astounding quality of Blu-ray.”

BONUS FEATURES ON THE
E.T. THE EXTRA-TERRESTRIAL ANNIVERSARY EDITION BLU-RAY™:

·      Deleted Scenes: Two scenes from 2002 version of the film.
·      A Look Back:  A special insider’s look into the making of E.T. featuring interviews with Steven Spielberg, the cast, and others intimately involved with the film.
·      The E.T. Reunion:  The cast and filmmaker reunite to discuss their thoughts on the impact of the film.
·      The Evolution and Creation of E.T.:  From idea to screenplay, throughcasting and making the film.
·      The Music of E.T.:  A Discussion with John Williams:  Interviews and footage focused on the long-standing relationship between John Williams and Steven Spielberg.
·      The 20th Anniversary Premiere:  Composer John Williams played the score of E.T. live at the Shrine Auditorium for the re-release premiere of E.T.   This featurette gives us a behind the scenes look at this presentation.
·      Original Theatrical Trailer
·      Special Olympics TV spot
·     Designs, Photographs and Marketing
·      UltraViolet™:  The revolutionary new way for consumers to collect movies and TV shows, store them in the cloud, and instantly stream and download to computers, tablets and smartphones. Consumers can now truly enjoy their movies anytime, anywhere on the platform of their choice.  Currently available in the United States only.

is available on Amazon for pre-order for only $17.96 and it's eligible for FREE Super Saver Shipping.