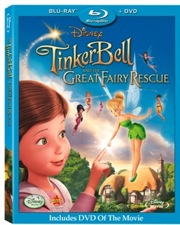 THE WORLDS OF FAIRIES AND HUMANS CONVERGE FOR THE
FIRST TIME IN AN ALL-NEW MAGICAL ADVENTURE
Disney's Tinker Bell and the Great Fairy Rescue
Debuts On Blu-rayTM Combo Pack, DVD, and movie download
September 21
Walt Disney Studios Home Entertainment Celebrates Spring Solstice with the Announcement of an Exciting New Adventure!

BURBANK, Calif. March19, 2010 – Tinker Bell, the world’s favorite fairy, will be spreading her mirth and magic for audiences of all ages, as the worlds of fairies and humans meet for the first time in Tinker Bell and the Great Fairy Rescue. An all-new, original full-length CG animated film featuring breathtaking animation, spectacular music and an all-star cast of voice talents debuts September 21st, 2010 on Blu-ray Combo Pack (includes Blu-ray and bonus DVD of the film & movie download).

Before she was ever introduced to Wendy and the Lost Boys, Tinker Bell met Lizzy, a girl with a steadfast belief in fairies. Tinker Bell and the Great Fairy Rescue begins in summertime in the beautiful English countryside. An enchanting encounter unfolds when Tinker Bell is
discovered by Lizzy, and as their different worlds unite, Tink evelops a special bond with the curious girl in need of a friend.

As her fellow fairies launch a daring rescue, Tinker Bell takes a huge risk, putting her own safety and the future of the fairies in jeopardy. This action-packed adventure takes the fairies of Pixie Hollow on a daring flight to London to save Tinker Bell and all of fairy kind.
Produced by DisneyToon Studios, Tinker Bell and the Great Fairy Rescue is a captivating and exciting adventure for all the family.

Disney Fairies has become one of the Walt Disney Company’s most successful franchises -- driven on multiple platforms and across numerous business units of The Walt Disney Company, including Disney Consumer Products, Parks and Resorts, Disney Interactive Media Group, and Disney Channel.

About Disney's Blu-ray + DVD Combo Pack:
To provide consumers with unprecedented quality, value and portability of their favorite
Disney movies, in 2008 Walt Disney Studios Home Entertainment pioneered the Combo Pack –
a Blu-ray Disc plus a DVD in a single package.

About Disney Fairies
Disney Fairies is rooted in Disney's rich heritage of children's storytelling. The franchise builds upon the enormous popularity of Tinker Bell and introduces girls to her secret, magical world and a new circle of enchanting fairy friends – Fawn, Iridessa, Rosetta and Silvermist – each with an incredibly diverse talent, personality and look. Launched just a few years ago, the $1B franchise boasts a thriving publishing and lifestyle merchandising program. To date,
over 675 Disney Fairies and Tinker Bell titles have been published in 57 countries and 31 languages, selling nearly 30 million copies; Disney Fairies magazines have sold over 7.5 million copies in 28 countries and an array of products from apparel and toys to electronics, home décor and stationery has extended storylines into many girls’ homes across the globe. DisneyFairies.com is now available in more than 20 territories across North America, Latin
America, EMEA and Asia Pacific. Fans have created more than 25 million personalized Fairy avatars to date that can take flight in the virtual world of Pixie Hollow. Disney theme parks have also launched a Pixie Hollow attraction where fans can meet the Disney Fairies. The Disney Fairies are highlighted in the production of Disney On Ice presents Worlds of Fantasy, and additionally, Tinker Bell is in four other Disney On Ice shows touring the world. Following the success of Walt Disney Pictures Tinker Bell on Disney Blu-ray and hi-def DVD, Disney released Tinker Bell and the Lost Treasure in 2009 as the second title in the series.


My thoughts:
What an adorable movie! We really really love Disney around here. Ever since Gracie discovered the Princesses. :) And Tink was soon to follow. Gracie said she liked the movie and was very "into" it. She sat and watched it all the way through...which for my little bouncy buns is a major accomplishment. Wonderful movie!!

*Disclaimer: I received this dvd free for review. The opinion is my own.*