I haven't forgotten about the contests. I'm waiting for the last one to end tonight and then tomorrow I'll be posting winners for all of them.

I've been so busy lately. I feel so bad because I'm behind on reviews and contests....but as much as I love all ya'll, I've got two little monsters that have been keeping me on my toes lately. That and the holidays are kicking my butt. :)

Last week, I had Matthew to the doctor THREE times. He has had a cough ever since he was sick earlier in November. It turned into a horrible wheeze and they FINALLY diagnosed him with bronchitis and RAD (reactive airway disease) - they gave antibiotics to clear up an ear infection and a nebulizer for breathing treatments...along with some steroids and cough syrup. He's been my little doped up baby - but don't think that got him down. As soon as he started feeling better (which was the very next day after diagnosis) he was into EVERYTHING!!! As much as I'd like to say that's been an irritation, it was so nice to see him feeling better. 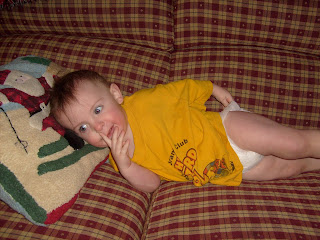 Can you see the ornery in him? Yea, I thought so. :) Notice how big that shirt is...that's because it's Sissy's shirt. He loves to get in Gracie's dresser.

Gracie seems to be totally over the flu and getting back to her normal self. During the time she was sick we figured out she has developed an allergy to peanut butter. Surprisingly, this hasn't been too hard on her - I say surprisingly because this child LOVES peanut butter. Reeses and Nutty Bars are two of her favorite junk foods. And for awhile it seemed like she survived on peanut butter sandwiches. I'm just glad we found out before she had any major problems. But she's feeling good and enjoying school and eagerly anticipating Santa Claus. She asks daily if she's on the Nice of Naughty List. <:o) 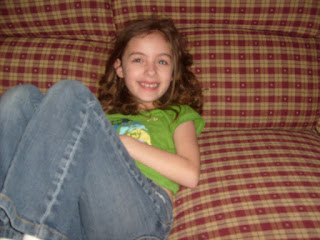 Look at this girl. Ain't she a beauty? I can't believe my baby girl is 6 years old...

LABELS: About Me, blogging