Oh my goodness, how amazing was the Tostitos Fiesta Bowl last night? I can not believe how well WV did! After having such upsets the past month...losing to Pitt and then losing their coach (Rich Rodriquez to Michigan), no one was giving them credit or the chance to beat Oklahoma in the bowl game.

Now I will say the state of WV was behind these boys 100%. We never gave up hope. Bill Stewart stepped up as interim coach and led these young men to an outstanding victory. The defensive and offensive lines were ready for a battle and they gave Oklahoma heck! The players that come to mind with plays that really made the game were Pat White, Owen Schmitt, Vaugh Rivers, Noel Devine, and Reynaud. I may be forgetting one or two...but these guys really stood out.

During the post game awards where Pat White received the Offensive line MVP, he said that they played as a family, that it wasn't anything new to WVU to be doubted by people. But that they continually overcome. And that he could say he spoke for himself and the team in saying they wanted Bill Stewart as their head coach.(That's an interpretation of his words - it was getting late!) In a locker room interiew, Owen Schmitt stated that Bill Stewart was the glue that held this team together. WVU, I feel, made a wonderful decision to hire him as their head coach this morning. Some people. one booster for the university in particular, doubts this decision saying he is more like a father figure...but he led them in a time of extreme upheavel. From what I can tell these players trust him, and right now that's what they need - someone to lead them and give them the opportunity to shine. Which they certainly did last night!

I cried, laughed, screamed...and I'm sure that a lot of fellow West Virginians did the same. It is so hard to describe how I truly feel about this...to watch these guys come back and show the world what they are made of - the Pitt game no longer matters, and Rich who? - this win was what they needed, what the state needed. You can doubt all you want...we are strong and we have Mountaineer Pride!!
posted at 2:46 PM No comments:

Ringing in the New Year!

I didn't really make it til midnight. Gracie defintely didn't. I fell asleep about 20minutes before 12. Robby woke me up with 8 seconds to go. I watched the ball drop then fell asleep again. :) I am soooo tired lately. Boy, I'll be glad to get over that stage of pregnancy...even if it is just for a short time.

The 1st day of the year was full of football, cabbage and our pet's birthday. Blondie turned 11. I wonder how many more she will be with us. She is such a part of the family. 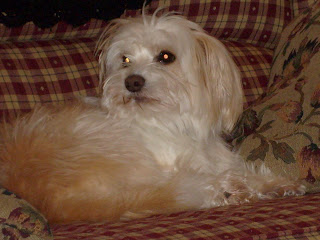 
FUN TIME WITH PIPE CLEANERS!
I had bought a package of chenille stems at the Dollar Tree. I looooove that place. But, anyways, I'm always looking for little crafty learning activities for Gracie. It keeps her busy, and she has fun. So we started playing with them right before bedtime...I know not a great time. But we had fun. Robby even joined in. We made animals and airplanes and Gracie even made Blue's Clue's thinking chair. It really looked like it too! I love family time.